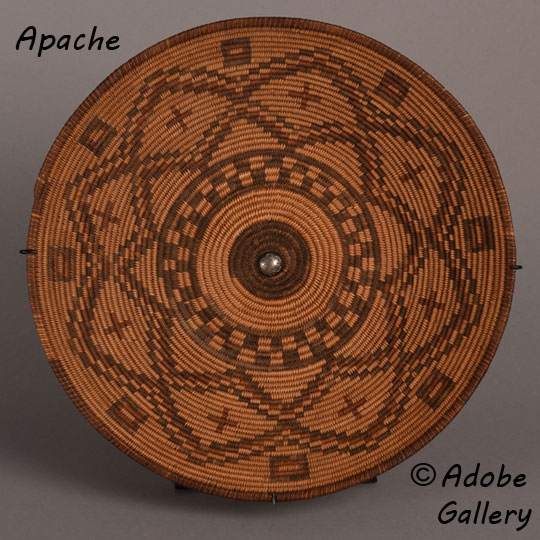 Among the Apache tribe basket makers-Western, Jicarilla, and Mescalero-the Western Apache basket makers produced the finest works. When baskets began to be made for sale in the late 1800s, designs became more elaborate and remained so into the 1920s. Care was taken by the women to make the most appealing baskets to a potential buyer. Western Apache basketry production exceeded that of the other Apache tribes and, as a result, there were more baskets of greater diversity from which a buyer could choose.

This beautifully executed basket incorporates a complicated design executed in black and red colors. The starting coils in the bottom center incorporate the traditional black circle which, after a few coils, expands to a checkerboard circle. Climbing the wall of the basket is a network of zigzag bands in two rows which together form a diamond shape chain around the wall. Within each diamond is a red cross.

Baskets that began as functional household items among the Apache family eventually developed into craft objects to be sold to tourists. Today, those baskets are considered works of art and have become collectible as such. This basket with its abundance of red in the design is especially collectible. A metal stand has been made specifically for this basket to display it in a favorable manner. There is a loop on the back to display the basket hanging on a wall. The silver button at the center of the basket may be removed if desired. It serves no function.

Provenance: this Western Apache c.1910 Polychrome Basket with Metal Stand is from a private collection