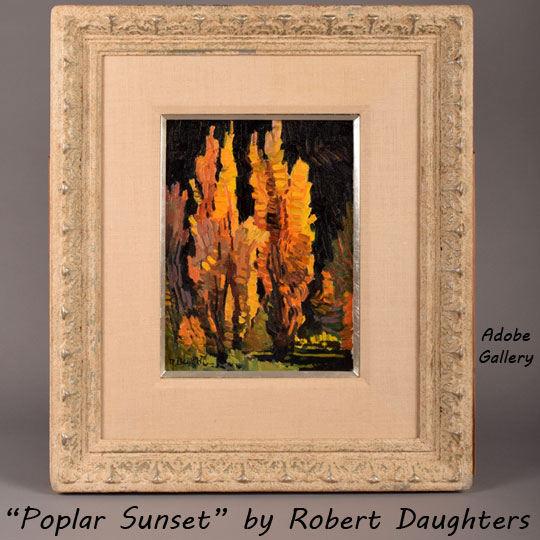 “Poplar Sunset” is an original oil painting by Robert Daughters.  The artist’s story—visiting New Mexico, falling in love with the land, and moving here to live and work—is a common one, but his work is anything but ordinary.  Stylistically, it’s unique, but it manages to maintain a sense of realism.  Daughters’ love of the land is apparent in his work, and that enthusiasm carries over to the many collectors who appreciate his paintings.

“Poplar Sunset” is a fine example of Daughters’ ability to capture the magic hiding within the natural world.  Here, we see a group of Poplar trees set in front of a black background.  The surrounding plants begin to look purple and green as the night sky takes over, but the Poplars’ vivid orange and yellow tones refuse to fade into the darkness.  It’s stylish and dreamlike, drawing the viewer into its atmosphere and inviting them to wander around for a while.  Though Daughters provides just enough detail (and a clear title) to tell us what’s happening here, the image feels mysterious and alluring.  This is an excellent example of Robert Daughters’ work. The painting is signed R. Daughters in lower left.  It is framed in an elaborately carved frame under a fabric mat.  It is identical in size to “Poplar Gold” and we suggest the two pieces be considered as a pair.