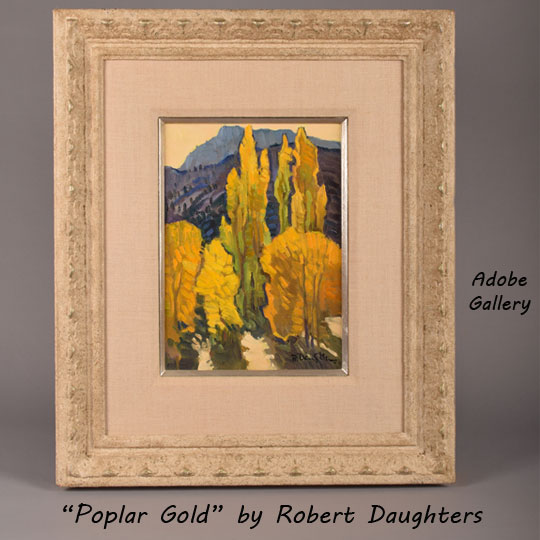 This oil painting, titled “Poplar Gold,” was created by New Mexico artist Robert Daughters.  With this piece, Daughters looks at the Northern New Mexico landscape through a narrow lens, focusing on a group of Poplar trees.  Autumn leaves glow bright yellow beneath a clear, almost white sky.  Touches of green and brown add depth and dimension to the tall, thin trees.  Behind the trees, blues and purples form a hill.  The hill includes barely noticeable touches of yellow, suggesting that the trees in the foreground are not alone in their transitional state.  Behind that hill, a mountain—soft blue and gray, suggesting distance—rises into the clear sky.  With “Poplar Gold,” Robert Daughters successfully pays tribute to the natural wonders of the Southwest. The painting is signed R. Daughters in lower right.  It is framed in an elaborately carved frame under a fabric mat.  It is identical in size to “Poplar Sunset” and we suggest the two pieces be considered as a pair.