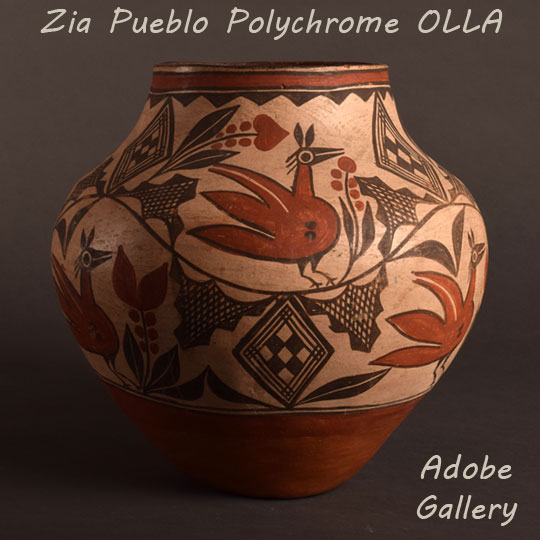 Crisscross hachure design elements began appearing around 1900 on Zia Pueblo Polychrome jars.  The cross-hatched triangles on this jar that are pendant on the black line waving up and down as it traverses the jar appear to have originated at Zuni and then were adopted by Zia potters, especially Rosalia Medina Toribio and Reyes Galvan Aguilar (c1860-1934) K'aamuyets'a. There are examples of their designs in Lanmon & Harlow referenced below, specifically on pages 154-155.

The crisscross triangles on this jar are quite similar to those by Reyes Galvan and the diamonds that are comprised of multiple lines and containing four black triangles are almost identical to those documented as having been painted by Galvan  Other similarities to published works are Galvan’s birds with erect feathers on their heads, white line separating the wings, black lines on the back of the head, black eyes outlined in white, and fat thighs and skinny legs. The tulip-like flowers are documented on jars attributed to Galvan as well.  The comparison of this jar to documented examples leaves no doubt that this one may be attributed to Reyes Galvan, circa 1910.

This jar is larger that most jars of the period.  Perhaps the potter wished to have a larger area on which to layout her design.  The birds are above and below the undulating black line in the same fashion as seen on jars with undulating single or double rainbows.  Eliminating the wide rainbow and substituting a single black line permitted more space for applying design elements.

The larger size of the jar and the beautiful arrangement of designs combine to make this an especially attractive one.  There is a slight tilt to the rim.

Provenance: from the Southwest Indian Pottery collection of a family from Santa Fe