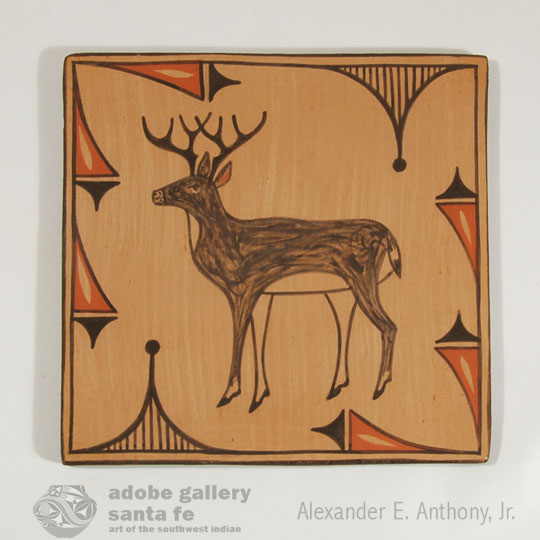 The influx of tourists to the southwest in the 1880s, on the newly operational train service, created a market for souvenirs that did not exist earlier.  In those early years, potters were content selling pottery jars and bowls of the styles which they were routinely making for their own use.  By 1920, the insatiable need of the tourists for smaller, more easily transportable souvenirs, resulted in potters creating items that had no functional use in daily pueblo life.  At Zia, such items included small pueblo houses, ashtrays, buttons, tiles, and other similar items.

This square Zia tile features a very realistic and artistic deer, head held high, motionless, and unafraid.  The deer is the focal point of the tile.  There is no ground plane, no trees, or other distracting items to draw attention away from the deer.  Traditional Zia pottery designs outline the edges of the tile.  The slip is a warm cream color on the front.  Red stone-polished slip covers the back. The tile is signed with the artist’s name and pueblo name.

Diana Pino Lucero is the adopted daughter of John and Vicentita Shije Pino.  The Pinos had married in 1934.  They had one son, José Hilario, and adopted three children, Diana being the only female. Diana learned pottery techniques from Vicentita.  She has won awards at Santa Fe Indian Market, exhibited at Heard Museum Show, Northern Indian Pueblos Arts & Crafts Show; Walatowa Arts Festival at Jemez Pueblo, New Mexico State Fair and other venues.

Provenance: this is from the Southwest Indian Pottery collection of a client from Colorado