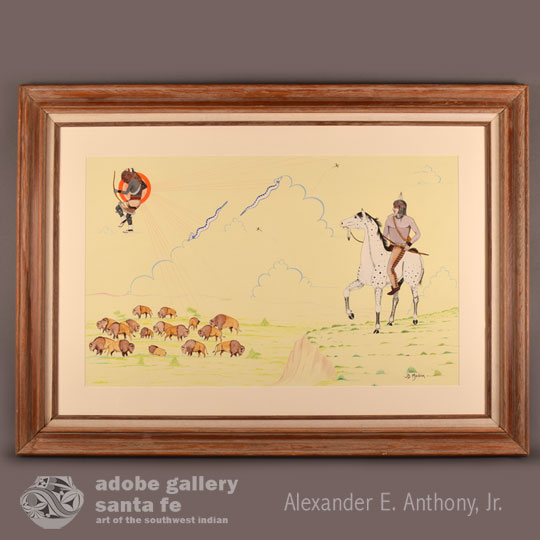 This large casein painting, titled “Buffalo Hunt,” was created by Zia Pueblo artist J.D. Medina.  Medina’s subject here is a hunter observing a field full of buffalo. The muscular hunter sits on horseback, holding his bow as he looks over his potential prey.  He’s positioned on a hilltop, close to the viewer. In the distance, sixteen buffalo graze and relax in the grass. The sky above the hunter is full of billowing cloud patterns that recall those used by influential Diné painters Harrison Begay and Beatien Yazz.  Some of Medina’s clouds extend from the mouths of flying Avanyus.

In the upper left corner, Medina included a detailed depiction of a Buffalo Dancer in front of an orange sun.  This design will look familiar to anyone who is familiar with the Medina family’s pictorial pottery designs. Thin orange lines emanate outward from the sun toward the buffalo, hunter and Avanyus.  A pair of birds—also somewhat reminiscent of those made by the Diné painters—circles the sky in the background. Medina’s color palette is light and wispy, save for certain areas which seems to have been deliberately emboldened with stronger colors.

The painting is signed “JD Medina” in lower right.  It is framed in a wood frame underneath a wide off-white mat.

José de la Cruz Medina (1935- ) is a well-known painter from Zia Pueblo who comes from a talented family of artists.  His grandmother was Trinidad Medina, who is known to have been one of the best potters at Zia Pueblo during the first half of the 20th century.  She is best known for having made beautiful very large storage jars with unique designs. J.D.’s brother was the painter Rafael Medina. Trinidad taught Rafael's wife, Sofia, the techniques of making pottery and Sofia continued to make pottery throughout her career.  She painted traditional Zia Pueblo designs and Rafael painted Indian School-style paintings on some of her pottery. J. D. was well known for his pueblo-style paintings long before he began painting with acrylic on pottery.

J.D. Medina attended the Santa Fe Indian School from 1949 to 1953, after the departure of Dorothy Dunn and during the tenure of Geronima Montoya.  From there he attended the Institute of American Indian Arts. He served in the Marine Corps, then returned to New Mexico and lived at the pueblo. He continued painting easel paintings and acrylic paintings on pottery pieces.