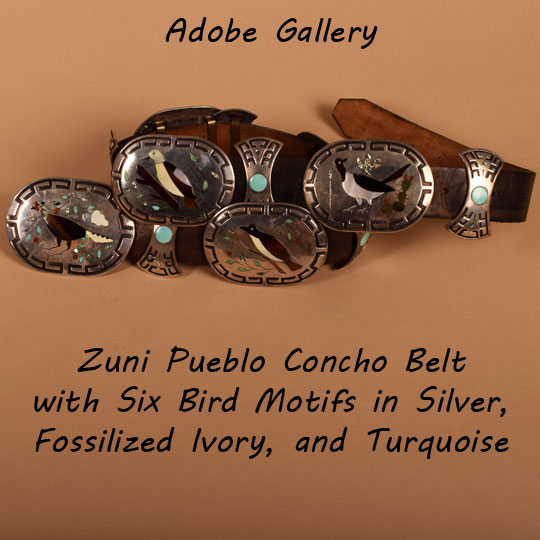 This six bird concho belt was made by the husband-and-wife team, Bernice and Roosevelt Tekala.  Showcasing exquisite Zuni mosaic inlay, the sheer amount of time and effort it would have taken to conclude this project as a team of artists must have felt like a feat of nature.

Six exquisitely crafted conchos feature unique bird motifs and are easily strung along a leather belt.  Breaking up the shell-shaped conchos, the artists designed a geometric shape resembling a bow that repeats and has been strung to alternate with the birds.  These are generally called butterflies on traditional concho belts.  Each of these butterfly forms is incised deeply with maze-like geometrics on its edges and a single flower resting in its center.

The pair of flowers on each of the concho butterfly pieces was formed from abalone, and each is wildly iridescent.  The center is grounded with a uniformly robin’s egg blue circle of inlaid turquoise.  If the belt is laid on a flat surface the edges of each of these forms curve around the belt and will touch the surface.  This allows the belt to be flush and not extend too far out from the body, making it easy to wear for such an ornate piece.

Every concho is different and features a distinct bird in its own environment.  Some birds scurry through the brush, while others are perched upon a branch.  Some birds are found with snow or red berries, while others are among the cacti—both saguaro and prickly pear.  It is clear the artists included scenes from around the American Southwest, and their creativity is both impressive and endearing.

A wide range of colors has been selected for this concho’s palette, as well.  Birds' bodies were fashioned from brown agates, fossilized ivory, and dynamic spiny oyster shells.  Verdant serpentine becomes prickly pear cacti. Abalone was used for leaves, saguaro cactus, and corn, and glistens among leaves and berries of spiny oyster and turquoise. It is easy to get lost in this concho and just as simple to claim its one-of-a-kind status, as it would be very difficult to duplicate.

Roosevelt and Bernice Tekala are from Zuni pueblo and collaborate in creating channel inlay and stampwork jewelry. They were the most active in the 1940s and 1950s.  Their primary forms are bracelets, earrings, necklaces, pendants, pins and watch bands and their favorite designs are flowers, feathers, and leaves.

Condition: A classic patina to the silver has occurred, leaving its natural hues.  Each piece was made to be sturdy and this concho belt is in excellent condition.

Provenance: This Zuni Pueblo Concho Belt with Six Bird Motifs in Silver, Fossilized Ivory, and Turquoise is from an estate in eastern Washington.

Recommended Reading: Zuni: A Village of Silversmiths by James Ostler Indians of the Enchanted Desert [SOLD]
by Leo Crane