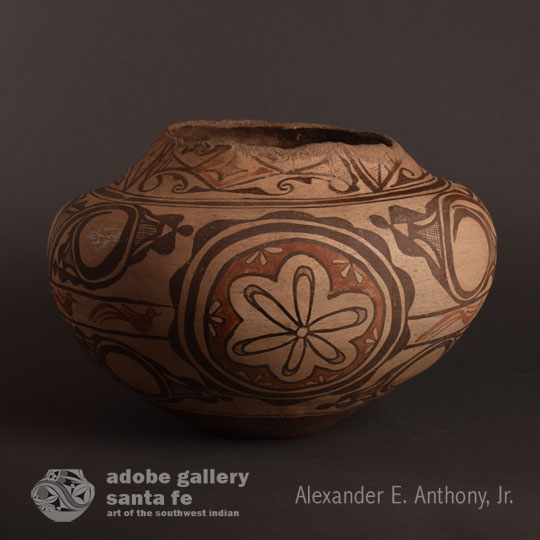 This Zuni jar, dating from the late 1800s, clearly shows that it was used at the pueblo for perhaps decades before being sold to some fortunate collector.  The jar is in excellent structural condition and has a wonderful amount of rim wear from the handle of a ladle. It is larger than standard water jars so it is likely one that sat in the same spot in the pueblo home, and was refilled from a smaller jar that was more convenient to carry when full of water.

The primary design feature on this jar is what has been named capped spirals and it appears on Zuni pottery dating since 1850.  In this jar, three capped spirals are joined by their long thin black line which ties them together.  There are capped spirals in two rows on the main body separated by a series of orange birds with strong black eyes.  The continuous band of orange birds is broken twice by placement of large medallion figures.

The neck design features the traditional daggers and hachured triangles seen on most Zuni jars of the late 1800s.  The rim of the jar and base were painted black and a slight puki line is discernible. The jar certainly dates to no later than 1880.

here have always been strict guidelines at Zuni Pueblo regarding pottery decoration, yet each potter has also always had some degree of freedom. The things that seem to be traditional and inflexible are the manner in which the main body decoration and that of the neck are separated. According to Zuni informants to Ruth Bunzel in 1924 and 1925, it is imperative that the first bit of decoration that goes on any Zuni jar be the black framing line or pair of framing lines that separate the neck from the main body. It is also imperative that this line or pair of lines not be connected. Today we refer to this as a ceremonial break. The informants were explicit in these statements.

The wide black framing line on this jar does have a ceremonial line break, but the two thin ones that frame the wide one do not have line breaks.

Another noticeable aspect of Zuni jars is that there is no correlation between the design of the neck and that of the body of the vessel, except that a certain harmony is preserved between the two. The preferred neck decoration seems to be that shown on this jar.  It consists of two designs and they are always used together. One of the designs has a diamond as its center, which represents the bird sling used by boys. The extended parts of this element with the crooks and hachured lines represent the face painting of the Newekwe society. The primary part of the second design around the neck is the triangular arrowhead-looking element that the Zuni women call the thunder knife which the priests used in many ceremonies. Another interesting observation is that the neck of the vessel is generally of the same height as the black underbody of the jar.

Traditionally, the body of the vessel is divided into three horizontal bands—two of which are wide and one narrow. Placing medallions at designated spots, as in this jar, frequently breaks up these horizontal bands; however, that further emphasizes the horizontal nature of the design. There are two medallions on this jar and both are simpler in style that medallions of the post-1900 period.

The upper and lower bands on this jar are of unequal width and feature mirror image designs, however, the design in the lower panel is executed in smaller scale due to the shape of the vessel. According to Bunzel, the spiral designs used in the upper and lower bands of a jar will never be used in any other position, such as the neck. Neck designs and body designs are not interchangeable. The spirals here were described to Bunzel as representing the drumstick used by fraternities in their ceremonies in prayers for rain.

A band of red birds, each with a black dot for an eye, separates the two bands of spirals. The birds are not outlined in black. The use of red elsewhere in the design of the jar is outlined in black, as in the triangles and the medallions.

This jar evidences a slight puki bulge at the underbody and a prominent ridge at the base of the neck. The underbody is concave and the rim exhibits a definite lip. It is an excellent example of a 19th century Zuni jar with designs that precede the now-popular deer designs.

Condition: this Zuni Pueblo Historic Large Pottery Jar with Ethnographic Rim Wear is in very good condition for a jar of this age.  There is some rim abrasion from use as a water jar and ladle.

Provenance: from a client in Washington D.C.