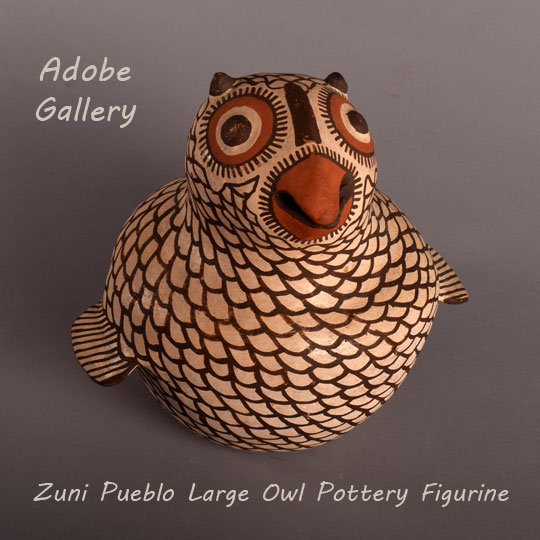 This Zuni Pueblo pottery owl figurine is fat and has an interesting-looking personality.  His large eyes fringed with eyelashes demonstrate that he is focusing on prey.  His beak is covered in red slip and the opening provided for safe firing of the figurine.  His body is filled with feathers and his lateral wings and tail have parallel lines.  The underside is white, and the figurine is not signed with the name of the maker.

The beak is fringed with whisker-like hairs.  Since owls are very farsighted, they can’t focus on objects that are too close.  Instead, these sensitive whisker-like bristles around their beaks help them detect objects at close range.

Other known facts about owls are that their eyes are not rotatable but are completely immobile, providing binocular vision which fully focuses on their prey and boosts depth perception. This means the owl can see objects in 3 dimensions (height, width, and depth), and can judge distances in a similar way to humans.  Owls can rotate their necks 270 degrees.

Like many animals, owls have three eyelids. The upper eyelid closes downward when the owl blinks. The lower eyelid closes up when the owl sleeps.  The third eyelid is called a nictitating membrane. This translucent eyelid moves horizontally across the eye, from the inner corner of the eye to the outer corner. The nictitating membrane is especially useful when an owl is catching prey—the owl can still see even while keeping its eyes safe from injury. [National Geographic]

Condition: excellent condition with one minor pop out on the rear of the figurine (see image below).

Provenance: this Zuni Pueblo Large Owl Pottery Figurine is from the collection of a family from Georgia