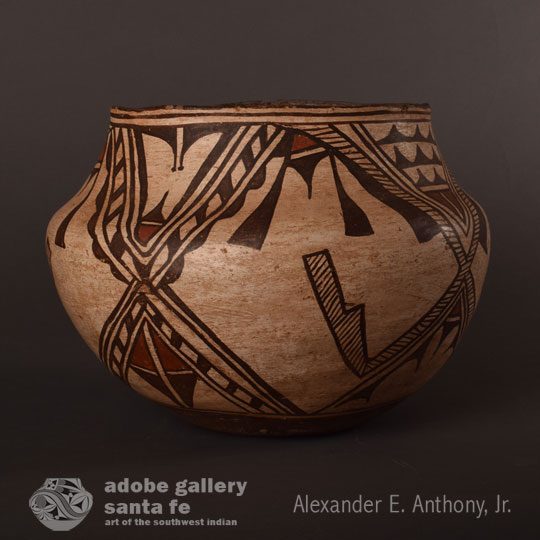 The uniqueness of the pattern is refreshing to see, as many of the jars of the early twentieth century were designed with heart line deer and floral medallions. The unusual design on this jar has appeared on Zuni Pueblo pottery jars as early as the 1910s and possibly as late as 1935. It is likely that this design was used by a single potter or a family of potters. The potter or family of potters who created this design deserve credit for innovation and a creative concept. It is refreshing to see such individual creativity during a period when there was little deviation from the norm.

According to Harlow and Lanmon in the referenced book, “. . . jars with this pattern were not included in any of the pottery collected at Zuni by the Stevensons in the late 1870s and 1880s; nor does the pattern appear in any of the pottery or photographs of pottery collected at Zuni by George Pepper for the AMNH (American Museum of Natural History) in 1903 or by Dr. H. J. Spinden in 1911-12.  This suggests that it was a design innovation made in the 1910s at the earliest.” Harlow & Lanmon 2008:438

A photograph taken at the Gallup Inter-tribal Indian Ceremonial in circa 1935 of ten Zuni olla maidens with pottery on their heads clearly shows three jars with this same pattern.  It is difficult to determine if the jars were older or newer at the time of the photograph.

Ruth Bunzel showed elements of this design to Zuni potters in the mid-1920s but there is no indication where she acquired it—from a potter or from an historic jar. She did not identify the design as a recent one, however. Harlow and Lanmon 2008:439

Condition: this Zuni Pueblo Polychrome Historic Pottery Jar is in very good condition for its age.  There are some rim chips, but nothing significant

Provenance: from a family in Albuquerque

Reference: Harlow and Lanmon, The Pottery of Zuni Pueblo