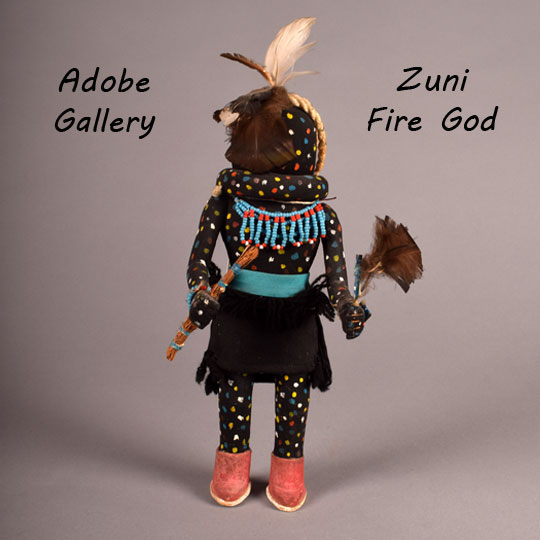 The artisan created a magnificent representation of this fire god katsina. It appears that it was carved from a single piece of cottonwood root for the body and head with the only attachments being the arms, which, in traditional Zuni fashion, articulate, and the ruff around the neck, which was made of fabric and wrapped around the lower part of the mask.

The katsina doll has a beaded necklace, a fabric kilt with fringe, fabric belt sash and, in his right hand, carries a fire stick, and in his left carries a prayer stick. His mask is topped with a grouping of feathers and two white twisted yarn ropes.

Shulawitsi is almost an exact duplicate of the Hopi Kokosori, but he is not related to Kokosori. A young boy who is innocent and pure of heart usually performs him. He carries a fire stick, signifying his responsibility as caretaker of one of the important physical elements of the universe: fire.  Shulawitsi appears with the Shalako ceremony.

“A major element in Shulawitsi’s proclivities toward fire is the fact that he must be impersonated by a preadolescent boy.  (Among their neighbors to the south, the Indians of northern Mexico, fire may only be tamed by a little boy who is too young to have had sexual intercourse.)  The emphasis on having a virgin youth in a role so important is unique in the Southwest. He is represented in this form among the Western Pueblo as well as among the Pima and Papago. [Wright,1985:31-33]

“In earlier times, Shulawitsi came completely nude, his body stained with black corn fungus or black cornstalk juice and dotted with other colors.  However, Victorian mores soon overrode this appearance and he now wears a small black breechclout.  To paint Shulawitsi requires five men, one for each directional color and it is thought that if the person applying the paint does not believe in kachinas, the paint that he applies will not stick.”  [Ibid]

“Shulawitsi’s impersonator is chosen during the Winter Solstice Ceremonies four days before Shalako, the ceremonial father gathers large piles of dry brush for bonfires at six particular points south of the pueblo.  When the Saiyatasha party approaches one of these piles, Shulawitsi lights it with his juniper bark torch and the kachinas pass back and forth between the fire and the pueblo before proceeding to the next pile as the first burns away.  The group ends up at the Saiyatasha house on the south side of the village, where they go into a four-day retreat.  The lighting of the bonfires is a signal for the Shalako impersonators to take out their masks and begin their ritual.” [Ibid]

Provenance: Originally from the personal collection of Frances Balcomb, owner Balcomb’s Galleries in the 1950s until 1970s.  Now from collection of a Texas client to whom we sold it in 2009.