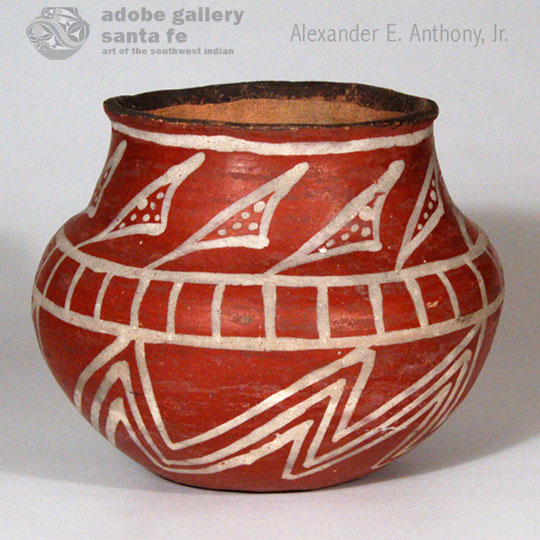 According to published information, Zuni potters experimented with putting red slip on pottery, rather than the standard cream slip, and painting the design with white slip, rather than the black normally used on Zuni Polychrome wares.  This anomaly existed during the period designated as Zuni Polychrome, however, it was short-lived, lasting only from 1890 to 1920.

There is no published information stating why the White-on-red period ended in the 1920s.  Speculation is that the newly-arrived trader at Zuni, C. G. Wallace, perhaps discouraged production of White-on-red in favor of the potters sticking to the traditional Zuni Polychrome style because he believed Polychrome wares would sell better. He was the primary, if not the sole, outlet for Zuni wares in the 1920s.

This White-on-red jar is smaller than others we have had in the past and those we currently have on our site, which makes it quite unique.  The white slip was expertly applied in a thick coat on an equally thick coat of red slip. There is no weakness in the application. The red slip extends to the bottom of the vessel,  Normally, Zuni jars have a brown lower body but not when jars are slipped in red. The rim is dark brown, the only brown on the jar.

Designs placed on White-on-red Zuni pottery appear to be totally different from those used on Zuni Polychrome wares.  This could be an indication as to why Zuni potters made White-on-red wares, but no explanation has been forthcoming. The zigzag design on the body, the squares on the shoulder, and the spotted triangles on the neck are not at all similar to designs on Polychrome wares of the same period.  Did White-on-red pottery serve a special function—ceremonial? We do not know and probably never will.

This White-on-red style could have been influenced by sherds from prehistoric St. Johns Polychrome from near the current Zuni Pueblo boundaries, or from prehistoric sherds being excavated at Hawikuh and Halona, villages of Zuni.  Anthropologists could have shown sherds to potters or potters could have unearthed sherds themselves for use as temper. It is easy to see that these White-on-red wares of the late 1800s had a precedent at or near Zuni and were not a completely new innovation dreamed up by potters of the day.  Zuni potters were aware they were reviving an ancient ware as they acknowledged this to Ruth Bunzel. Interestingly, while this revival of an ancient ware was occurring at Zuni, a similar revival of Sikyatki pottery was underway by Nampeyo at Hopi.

Provenance: formerly from the inventory of the Museum of New Mexico as indicated by a stamp on the underside with item number 4016 noted.  There is no date as to when the museum deaccessioned it. 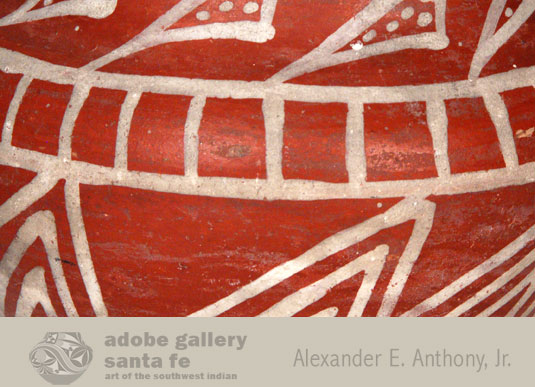