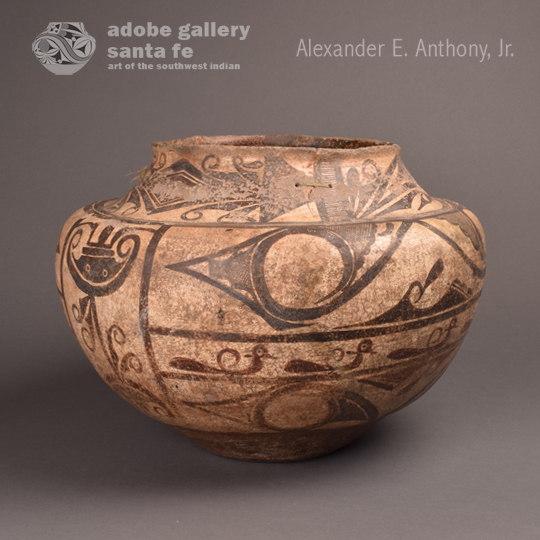 It has been determined that this jar dates to no later than 1870, based on several factors—the form of the jar has its widest dimension just slightly above the mid-section; there is a *puki depression on the brown underbody; the design on the body is a single continuous pattern rather than being divided into panels as on later jars; the simplified vertical pattern design is less elaborate that those after 1870; and the lack of a medallion in the design which appeared around 1870.  These combined would indicate a date of 1870 or earlier.

The size of the jar, approximately 11 x 15 inches, is indicative of one made for home use, as jars made for sale through traders were generally smaller.  The extensive wear patterns and the two native repairs on the neck back up this hypothesis. The jar shows extensive use patterns. It is quite likely one that was overlooked by the many museum authorities who were there collecting in the late 1800s or perhaps one that the owner refused to part with.

The precision with which the design was applied is an indication of an expert artisan.  The cross hatching is well above average, and the capped spirals are perfect circles, something quite amazing when known to have been applied freehand with a yucca paint brush.  The large size of the jar and its beautiful design elevate it above the norm and establish it as a true work of art. It is even more amazing when one accepts that such an effort was expended on a vessel whose intended purpose was utilitarian, not art.

The curved beak or spiral on the design just below the shoulder has been identified as a Rain Bird element, referred to by H. P Mera as "constitutes the second division of 'Rain Bird' derivations." Mera, 1937:41

When Stewart Culin was at Zuni Pueblo in 1904 for the purpose of collecting for The Brooklyn Museum, he observed pottery making in June, the traditional time for that artistic activity.  We include his comments purely for interest. It has no relation to this Zuni jar, but we found it to be an interesting observation by Culin.

“For some time past, the women have been making pottery.  They carry the hard dark blue clay from the top of Towotalani (Corn Mountain).  The clay is broken in small fragments with an axe on a special stone on the floor of the living room of the house.  Then, after being reduced nearly to a powder with a grinding stone, it is mixed with water into a thick gray paste in an ordinary food bowl.  Powdered fragments of old pottery are often added to the mass. In making a bowl, a woman rolls a piece of the clay on a flat stone until it assumes a cylindrical form.  She then takes a piece and coiling it around, at the same time flattening it and crimping it with her fingers, gradually builds up the bowl with successive coils.

“After the vessel was smoothed (with a rounded fragment of gourd shell) and dried, a paste of white kaolin was applied to the surface inside and out in the case of a bowl, or the exterior only in that of a jar.  The jar was then burnished with polishing stones and decorated. The paint is applied with a little slip of yucca stem. The designs are all more or less symbolic, and are repeated from memory.

“Firing took place next.  The vessel is supported upon some fragments of adobe and a kind of furnace is built up of dung entirely around it.  When the fire is applied, the last pieces of dung are added, with some large fragments of old jars to prevent the fuel coming in direct contact with the jar. The operation of burning lasts about half an hour.  The dung is reduced to an ash, leaving the vessel, white and bright, ready to be lifted from the ashes and put into practical use as soon as it has cooled."

In Zuni Notes, Cullin stressed the precautions that were observed during the firing.  “Great care is exercised to prevent the jar from becoming smudged or distorted, two women usually holding blankets if there is a wind so that the fire will burn evenly.  A man whose wife is pregnant, or a pregnant woman, must spit on the jar in passing, or it will be crooked or blackened. A woman when painting a jar must not talk aloud or the same thing will happen.”

*Puki Depression: hand coiled Pueblo pottery is started in a basket or bowl. Once the coils reach the edges of this container, the potter continues coiling. When the pot settles, it slightly pushes over the edge of this container and creates a discernable impression that can be felt by touch after the firing process. This container is called a puki.

Condition: the Water Jar shows evidence of extended use.  There are surface abrasions, native repairs, and rim wear from ladle friction.  UV examination reveals prior breakage, professional repair and overpaint.

- The Pottery of Zuni Pueblo by Lanmon and Harlow 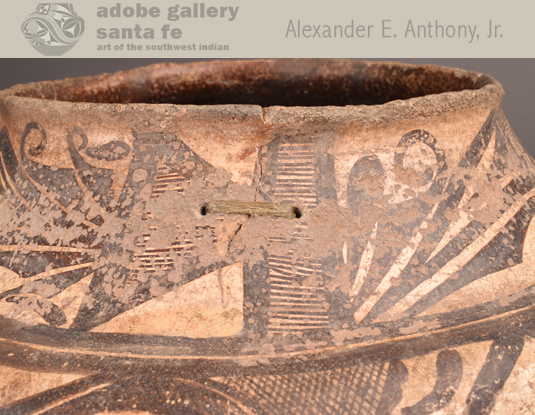