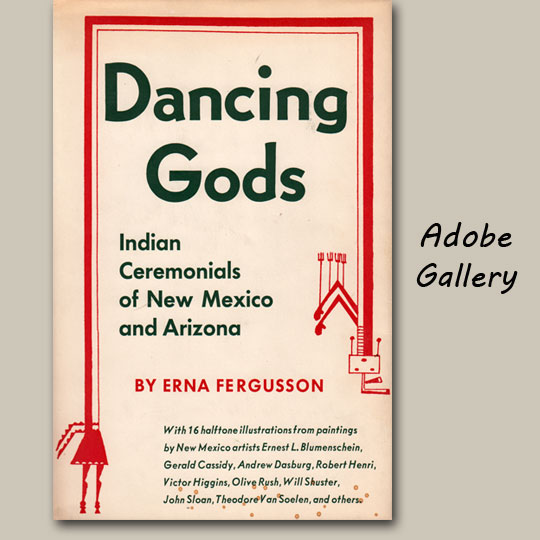 Hardback, first edition 1931, 276 numbered pages.  Fabric (linen) cover over board with image of katsina mask in black and brown.

The Pueblo Indian and the American

Dances of the Rio Grande Pueblos

The Buffalo- and Deer-dance at San Felipe

The Parrot-dance at Santo Domingo

The Turtle- or Evergreen-dance at Isleta

The Corn-dance at Santo Domingo

The Rainbow-dance at Santa Clara

The Pecos Bull at Jemez

The Leaving of the Gods

Niman Katchina: The Going-away of the Gods

The Day of the Snake-dance

The American Conquest of the Navajos

The Reservation and the Government

The Legend of the Mountain Chant

Going to the Mountain Chant

The Night of Dancing

The Mescalero Apache Fourth of July

The Fourth of July

A note from Erna Fergusson

Southwestern Indians have no better friends than artists, who recognize that the Indian is essentially an artist.  They value his art in all its forms, they help him without condescension, and they respect his integrity too much to try to make him over into something foreign.  I am grateful to these distinguished artists who permit me to enhance my descriptions of Indians and their dances with their own vigorous, sympathetic, and humorous interpretations of them. 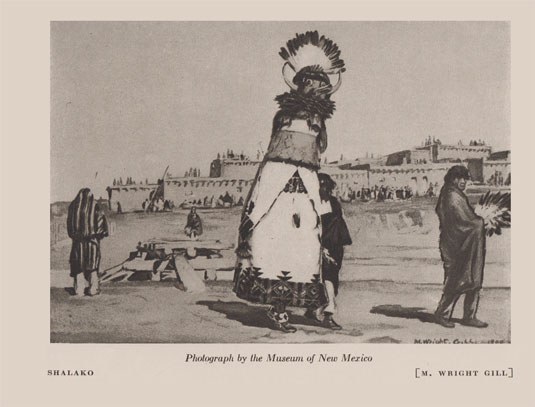