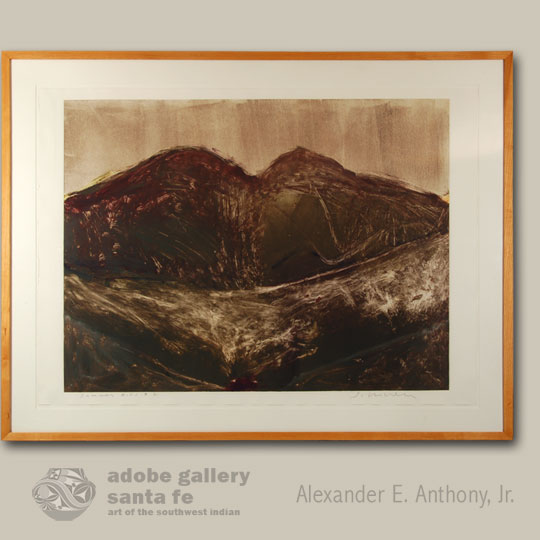 In the summer of 1970, a company named Tamarind moved to New Mexico from Los Angeles. Tamarind’s Albuquerque print shop was housed in a building adjacent to the campus of the University of New Mexico. Once established in New Mexico, Tamarind selected Fritz Scholder (1937-2005) as its first New Mexico artist to produce lithographs at its new facility.

Scholder had a long, productive and very successful career with Tamarind. Over several years, he produced 92 lithographs at Tamarind.  Lithography was well suited to Scholder’s talents and he rapidly won international acclaim for his work in that medium.  He was inspired and invigorated by his success with lithography and began exploring other printmaking methods, including monotype printing.

Monotype printing is a method of printing in which an image is created on a smooth, non-absorbent surface (usually a copper, zinc, glass or acrylic plate) and then transferred to a sheet of paper by pressing the two together.  Monotype printing offers certain advantages over lithography that were likely attractive to Scholder, including freedom to compose multicolored images spontaneously.  He was able to use a wider variety of colors, too, and to mix his chosen colors in ways that were impossible with lithography.Scholder’s monotypes are, like the best of his paintings, beautifully abstract works that somehow appear to have been created effortlessly.  In “Summer Hills #2,” Scholder’s expressionist brushwork and non-naturalistic colors breathe new life into another subject that has been depicted in countless artworks: the Southwestern landscape.  He used just two colors—purple and green—to create a richly-textured landscape that is, despite its common subject matter, totally unique and instantly identifiable as a Fritz Scholder composition.

“Summer Hills #2” is a very large monotype, measuring about three feet by four feet in its frame.  It is totally unique and was not printed in multiples. This monotype was completed at Rezvani Workshop in Scottsdale, Arizona.   It is signed and titled by the artist, and marked with Rezvani’s chop mark and Scholder’s buffalo chop mark.Condition: "Summer Hills #2" Monotype is in original conditionProvenance: from the large collection of a Santa Fe resident