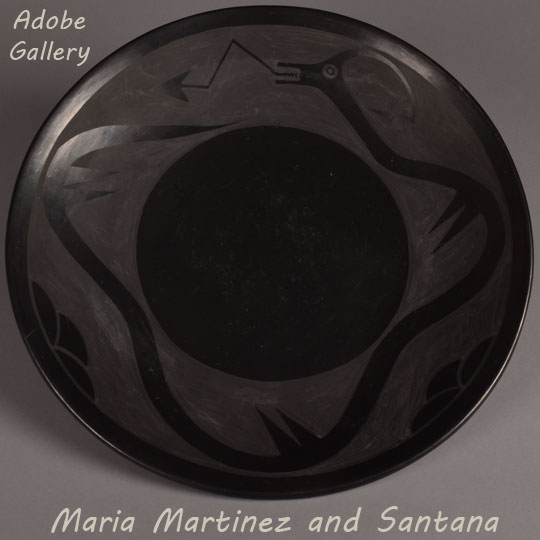 Maria and Julian Martinez certainly established blackware pottery as a collectible for many generations to come. When Julian passed away in 1943, Maria was left with no one to paint the designs on her exquisite masterpieces. It was then that Santana Martinez, wife of Maria’s oldest son, Adam, stepped in and began painting the designs for her mother-in-law. Santana continued doing this until 1956, when Maria’s other son, Popovi Da, started painting for his mom.

Santana came from a family of very famous potters and painters. Her mother was Alfonsita Martinez Roybal, an accomplished potter. Her uncle, Crescencio Martinez, was the first painter from San Ildefonso and one of its finest artists. He was married to Maria’s sister, Maximiliana. Santana’s aunt was Tonita Martinez Roybal who has been considered one of the finest potters at San Ildefonso and probably the closest as a competitor to Maria. So we see that Santana came from a family of extremely talented artists and she, herself, proved to be one too. This is a very early Maria and Santana Black-on-black plate. It was purchased in 1943, the year Julian passed away and the first year that Santana painted for Maria. It is signed Marie + Santana, a signature used from 1943-1956. Note the thinness of the Avanyu (water serpent), compared to those painted later by Santana. There is a buff-on-red plate painted by Santana illustrated in Spivey’s book, plate 68, with a similar thin Avanyu design.

Condition: This Black-on-Black Avanyu Design Plate by Maria Martinez and Santana is in very good condition with some minor scratches consistent with what one would expect on a piece over 75 years old.

Update: Noted authority Richard Spivey sent me the following comment which we are pleased to print: "Maria retired from pottery making in October 1970; she made no pottery for the commercial market after that time. Santana did not pick up on painting Maria's pottery after Po's death since Maria was no longer potting." MARIA: The Potter of San Ildefonso
by Alice Marriott