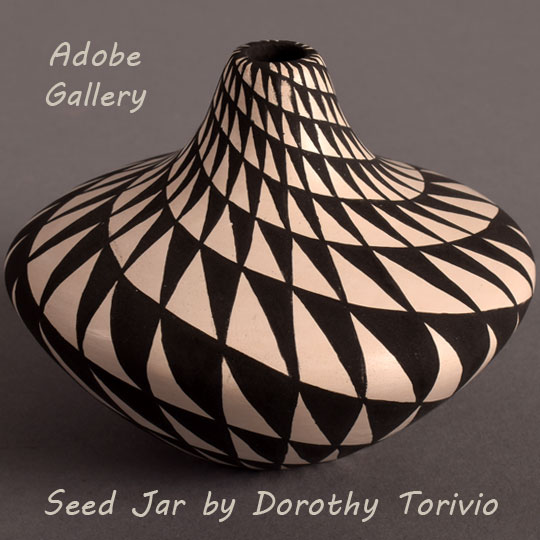 This is one of Dorothy Torivio's raised center hole pottery seed jars from which the spiral design has its beginning in exceedingly small scale and expands and grows as it spreads to the maximum diameter, then starts shrinking in scale as it progresses to the base. It is almost incomprehensible that an artist could maintain such control in the spirals and triangles, but Acoma Pueblo artist Dorothy Torivio was an expert at doing so. There are ten spiral swirls throughout the seed jar. Dorothy Torivio (1946 - 2011) was the most progressive artisan at Acoma Pueblo since as early as the 1980s. She was born at Acoma Pueblo and is renowned for her innovative work in exaggerated seed-pot forms in large and miniature sizes. She painted her hand-coiled and outdoor-fired pots with black and white or polychrome patterns of staggering intricacy, painted fresh, and with computer-like precision.

Torivio extrapolated the innovative forms and decorations that were initiated by the famous Acoma potters of the previous generation, Lucy Lewis, and Marie Z. Chino. She learned to make pottery from her mother-in-law, Lolita Concho, who taught her how to paint fine lines. She, herself, devised the method of choosing a design and repeating it over and over in a geometric pattern. Each design element in her repertoire has its root in Mimbres symbols.  Her pottery works are traditional in manufacture but progressive in design. The design is based on repetition of a singular element meandering throughout the vessel, starting small at the rim and underbody, and expanding in scale as the pottery vessel expands at its midsection.

Dorothy would come to Adobe Gallery in Albuquerque when Lolita brought in one of her large jars and I always asked Dorothy to bring me some of her work, but she was busy filling orders from Lee Cohen of Gallery 10.  Finally, one day, she brought me some and continued doing so for several years. It was a great loss to the art community when she passed away at age 65.

Provenance: this Elegant Acoma Pueblo Pottery Seed Jar by Dorothy Torivio is from the collection of a gentleman from New York