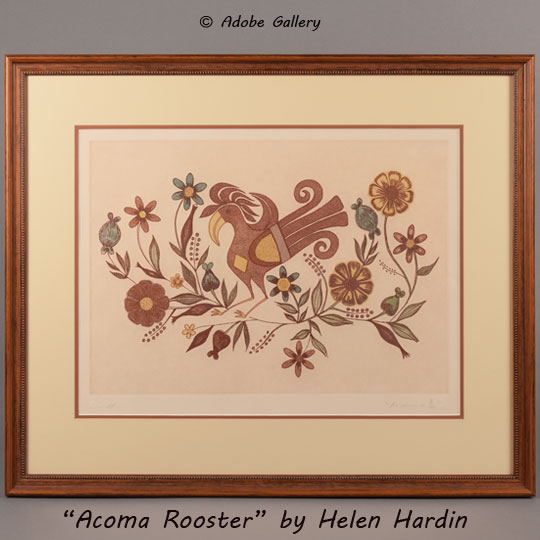 A truly beautiful image by Santa Clara Pueblo artist Helen Hardin of the Acoma foliate-avian tradition. Although titled as a rooster, this work depicts the Acoma parrot perched atop an elaborate spray of foliage and intense blossoms and unopened floral buds. Beautifully balanced and etched with a suggestive, searching line with hatching and interior embellishments, charming and enchanting with superb color handling and sensitivity of line or mark. This etching was printed in ochre, blue, and red against a hand-wiped background plate on cream paper.

The etching was begun on June 1, 1981 and completed on July 15, 1981.  The master printer was Ricardo C. Ximenes at El Cerro Graphics in Los Lunas, New Mexico. The shop mark is on lower left, the printer’s mark is on lower right and the artist Helen Hardin's Native name, Tsa-Sah-Wee-Eh , her Little Standing Spruce cartouche and her initials HH, appear in lower right. There were 65 Arabic numbered in the edition.  This is numbered A/P, which stands for Artist Proof.  There were six of those printed and presented to the artist for her personal distribution.

Helen Hardin (1943-1984) Tsa-Sah-Wee-Eh - Little Standing Spruce of Santa Clara Pueblo was one of the most fascinating, complex, and engaging figures in the American Indian art world. Hardin was born in 1943 to Santa Clara Pueblo painter Pablita Velarde and Caucasian civil servant Herbert Hardin. Inspired by her mother, she began creating and selling paintings as a teenager. She went in a different direction than her mother and her mother's peers, creating more contemporary work that depicted Native American symbols with striking geometrical patterns. Hardin's distinctive and compelling style became more fully realized in the 1970s, with a series of paintings of Katsina figures. These and her later works are immensely complex works of art that have been displayed in museums around the world.

Provenance: this Santa Clara Pueblo Aquatint Etching "Acoma Rooster" by Helen Hardin is the estate of a former client from Colorado