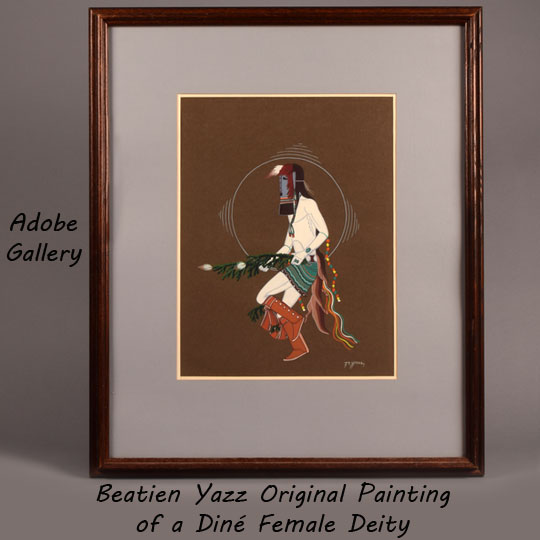 This untitled ceremonial scene was painted by Diné artist Beatien Yazz.  To identify the dancer depicted in this image, we reached out to a Diné artist who is very familiar with his peoples’ ceremonies.  According to him, “the painting represents Yei’baadi’, the female deity of the Nightway ceremony. During the duration of the ceremony, the deity is impersonated by both male and female dancers. In this painting, she carries spruce wands in both hands during the dances of the ninth and final night.”

Yazz’ work with this ceremonial dancer is of his typically fine quality.  Of the many Yazz paintings we have featured in our current exhibit, this is the one that most closely follows the rules of the traditional style.  A decorative circle surrounds the dancer, but there is no landscape, background, or environmental element.  His posture—one leg raised, the other planted firmly on invisible ground—is reminiscent of that which is often seen in dancers painted by earlier Diné and Pueblo artists.  As usual, the details of the dancers’ regalia were depicted carefully and beautifully, and the color choices are bold and attractive.  This is a wonderful example of Beatien Yazz creating work that honors that of his predecessors.

The painting is signed B. Yazz in lower right.  It is framed in a carved wood frame under a wide mat.

Beatien Yazz (1928-2012) Little No Shirt (Jimmy Toddy) was a painter who was born in 1928 on the Navajo Reservation.  At an early age, Yazz met Bill and Sallie Lippincott, traders at Wide Ruins Trading Post. They recognized Yazz’s talent and made available to him scraps of paper and other equipment so that he might practice his artwork.  He enjoyed a long career as a painter, illustrator, and art teacher; and at one point worked for the Navajo Police Department. He served in the U.S. Marines in World War II and was a member of the famed Navajo Code Talkers. Following the war, he returned to the reservation and began to paint in earnest. He specialized in subjects familiar to him in his daily life on the reservation. He has been popular with collectors since the 1950s.

Provenance:  this Beatien Yazz Original Painting of a Diné Female Deity is originally from the collection of the family of Balcomb's Ranch Gallery, Colorado, now from a client from Oklahoma to whom we sold this in 2010, and now have back to sell again.