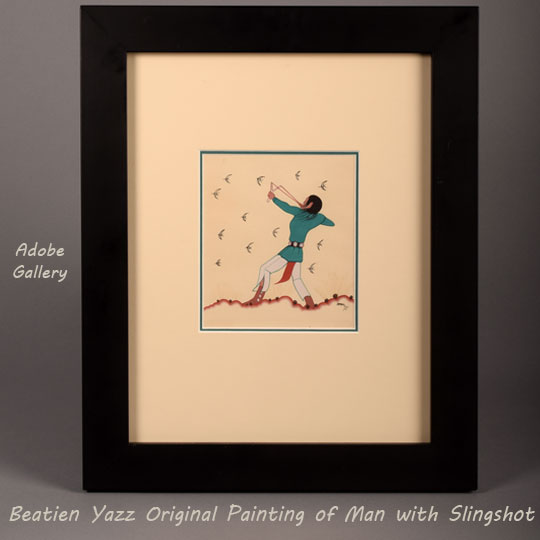 This original painting by Diné artist Beatien Yazz features a man aiming a slingshot.  At about six inches in height and just over five inches in width, this is a smaller piece, and modest scale seems to suit the image perfectly.  The man leans back and pulls the band of his slingshot, aiming either into the bird-filled sky or at some other out-of-frame target.

Yazz’ work with this piece is subtle but stylish.  His colors are strong and attractive, and his composition elegant as ever.  The earth upon which the man stands is represented by three lines of linked semicircles in red, pink, and white.  Wispy lines in tan rise from the earth, forming plants that almost blend in with the paper’s color. A small signature in the corner completes one of the stronger smaller-scaled paintings we’ve seen from Beatien Yazz.

The painting is signed Beatien Yazz in the lower right.  It is framed in a black frame, under two layers of matting in off-white and blue.