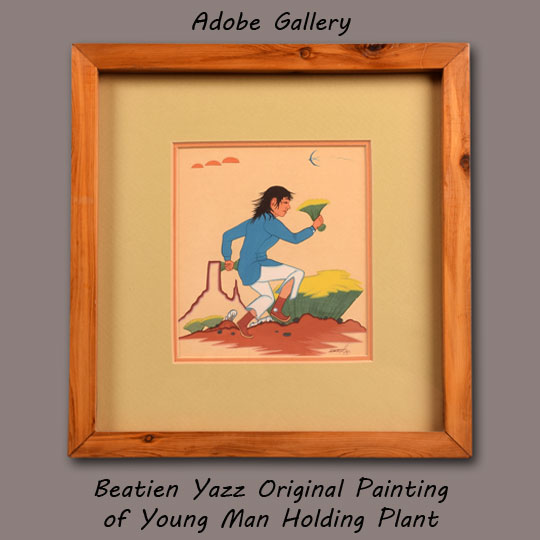 This original painting was created by Diné artist Beatien Yazz.  It features a profile depiction of a young man placed within a simple but effective landscape.  The young man is running, or perhaps skipping, across the Navajo Nation.  He holds in each hand a bundle of plants.  Behind him, larger clusters of the same plant emerge from the dry earth.

Further into the background, a series of lines forms a stylized depiction of a sandstone butte.  It begins with a nice purple tone and ends with a light pink. Up above, three orange semi circles form abstracted clouds, and a single bird flies in their direction.  As usual, Yazz’ colors are appealing, and each element seems to have been crafted with care.  This is a sweet image from an influential Diné artist.

The painting is signed Beatian Yazz in lower right.  It is framed under a tan mat in a thin wood frame.

Beatien Yazz (1928-2012) was an influential Diné artist.  He went by and signed a few different variations of his name during his long career.  In Wide Ruins: Memories from a Navajo Trading Post, Sallie Wagner explains the origins of the name we know best: “A house guest one summer, a sun-loving artist from California, wandered the hills around Wide Ruins wearing only trousers and a hat.  The Navajos dubbed him No Shirt.  When Jimmy began to paint, also in trousers and hat, he was naturally called Little No Shirt, even though he wore a shirt.  In Navajo that is Beah Etin Yazz so I printed that translation for Jimmy to sign his work.  He carefully studied the letters but did not find their arrangement to his liking, so he rearranged them slightly to spell out Beatin Yazz, the name he still signs to his paintings.”

Provenance: this Beatien Yazz Original Painting of Young Man Holding Plant is from the large collection of a Santa Fe resident, who purchased the piece directly from the artist. WIDE RUINS Memories from a Navajo Trading Post [SOLD]
by