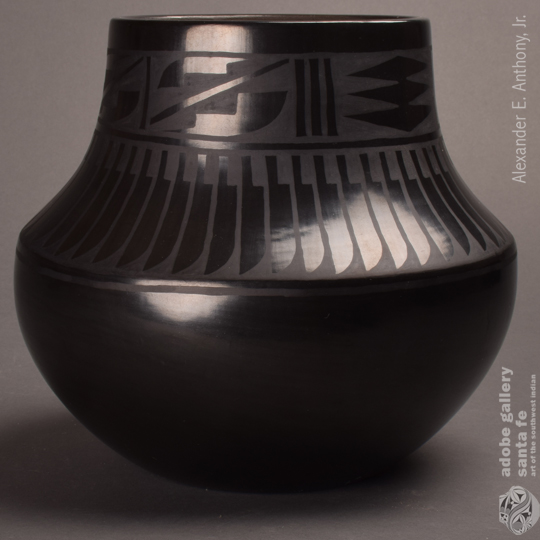 Florence Aguilar Naranjo was a daughter of Rosalie and Joe Aguilar of San Ildefonso Pueblo. She won many awards at Santa Fe Indian Market during 1978 to 1986.  She was an active potter from the 1940s to the 1980s and specialized in making Black-on-black pottery. There is very little published information on her or her work, however, there is a photograph of her taken by T. Harmon Parkhurst, circa 1935, seated beside her mom on their outdoor horno.  It is published in Schaaf 2000:210.

If one were to judge the work of Florence solely on this jar, then she would receive accolades as it was beautifully crafted, designed and decorated.  Her added touch of the row of cloud elements in rectangular boxes just below the rim adds a horizontal element to the vertical feather design and makes it different from most feather design jars by other potters.

Condition: this Black on Black Large Jar with Feather and Cloud Designs is in very good condition

Provenance: from a gentleman resident of New Mexico