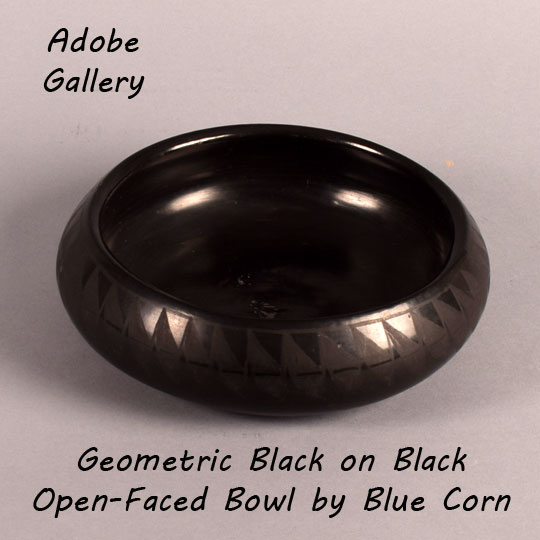 There is no arguing the prolific nature of Blue Corn’s talent.  Crucita Gonzales Calabaza (1921-1999) Blue Corn was one of the greatest and most versatile San Ildefonso ceramicists. She made pottery for over 60 years, working in black, red, and polychrome using a variety of forms.  This bowl stands out from her other work with its open face and larger size.  The bowl’s shape was formed with expert precision, and great care was taken in hand rock-polishing both the interior and exterior.  The exterior features a repeating triangular geometric pattern that is mesmerizing to the eye.

Blue Corn’s house was located across the plaza from that of Maria Martinez, but there was no competition between the two artisans. She was one of the most honored of twentieth century potters. She received the 1981 New Mexico Governor's Award—New Mexico's highest artistic award—and she was acclaimed for her artistic accomplishments in the Wall Street Journal and AMEPNKA, a Soviet Union journal. She won awards at State Fairs, Indian Market, and other notable exhibitions.

Condition: good condition, structurally sound with no chips, but some small abrasions including one on the interior.

Provenance:  this Geometric Black on Black Open-Faced Bowl by Blue Corn is from the estate of Henry Christensen III, former attorney at law of New York City who purchased it from Adobe Gallery in 2008