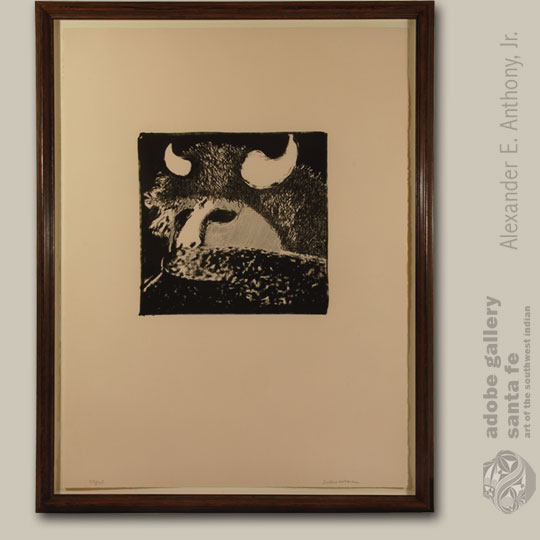 Fritz Scholder, a painter and printmaker who was one-quarter Luiseño, vowed early in his career never to “paint the Indian.” Scholder eventually became interested in Native art and culture—particularly that of the New Mexico Pueblo Indians—when he moved to Santa Fe to teach at the newly-established Institute of American Indian Arts.  Scholder was inspired by the ideas presented to him by his young Native students, and ultimately decided that he himself needed to tackle the subject.  He painted his first Indian during the winter of 1967, and would go on to create hundreds of images of Indians.  They were fresh, beautiful, and occasionally controversial.  They have become some of his most iconic images.

In 1970, Scholder signed a contract to create a series of lithographs at Albuquerque’s Tamarind Institute.  He had experimented with lithography in college, and described the process as “laborious and terribly technical.”  Under the guidance of Tamarind’s experienced printers, however, Scholder began to enjoy the lithography process. Scholder was invigorated by what was, to him, a new way to create and present his ideas.  His first major project at Tamarind was his “Indians Forever” suite, which was presented in a portfolio containing eight of his best early pieces.“Buffalo Dancer” is one of the eight images that comprise the “Indians Forever” suite.  According to Clinton Adams’ “Fritz Scholder Lithographs,” the creation of this “blunt and assertive” piece happened rapidly and naturally.  Scholder drew the piece quickly and was immediately pleased with it.  There was no question of whether or not it would be included in the suite—Scholder and his printmakers were immediately pleased with this striking black-and-white image of a buffalo dancer’s face.

This lithograph was produced in one color and completed in January 1971 in an edition of 75.  It is featured in both Clinton Adams’ Fritz Scholder Lithographs and the Smithsonian Institution’s Scholder/Indians.  This is # 57 of 75.  It is mounted so that the entire image is visible.  The lithograph was executed at Tamarind Institute, the renowned lithography workshop in Albuquerque that is affiliated with the University of New Mexico. 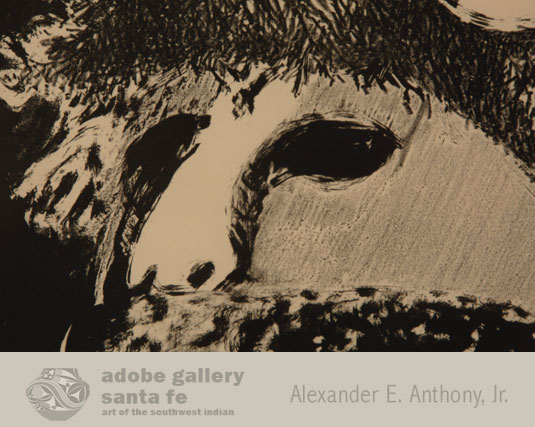