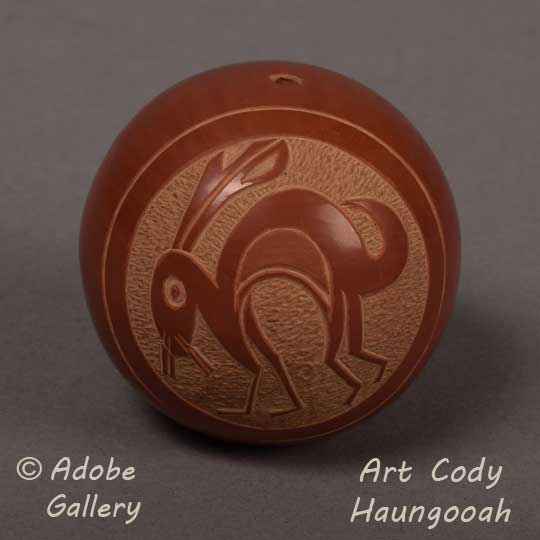 This carved redware seed pot was made by Art Cody of Santa Clara Pueblo. It is a strong example of the style Cody used most frequently, which places sgraffito-carved designs on small round seed pots. This pot is almost perfectly spherical, except for the small flat base that allows the piece to stand comfortably.

Cody carved a circular form into one side of the spherical pot. A rabbit is carved in relief, with long ears and pairs of whiskers reaching almost to the circle's edges. It is a stylish and attractive design that was executed skillfully. With the exception of the thin circular band that surrounds the primary design element, no additional adornments appear. The pot's red tone is beautifully matched to its form and design.

The bottom of the pot is signed Haungooah.

Santa Clara Pueblo artist Art Cody Haungooah (1943-1985) is well known for his modern pottery creations. Haungooah was the grandson of the famous Kiowa medicine man and scout James Haungooah, also known as Silverhorn (1861-1941). The first Haungooah became famous in the 19th century for his fantastic ledger drawings of life on the Southern Plains. The Haungooah name means "sunlight reflecting off a buffalo horn" in the Kiowa language. The second Haungooah, Art Cody Haungooah, married Martha Suazo from Santa Clara Pueblo in 1972. She was a potter and encouraged him to decorate her works for her. He became an outstanding decorator of miniature pottery and was one of the early artists to perfect the sgraffito style of carving, along with Joseph Lonewolf and Tony Da. In 1979, Pierre Cardin recognized him and his wife, Martha, for their artistic excellence. The famous French designer organized a European tour, which showcased their work. When Martha died (date unknown), Art Cody continued making pottery alone. He then met with tragedy in a head-on automobile collision in 1985. Their awards are documented for Indian Markets in 1978, 1979, and 1980.

Provenance: this Carved Redware Seed Pot with Rabbit Design is from a private collection