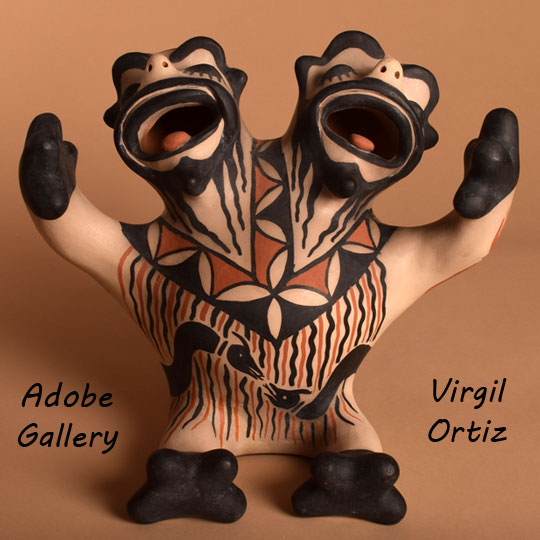 This double-headed pottery figure is Virgil Ortiz’s trip back to his ancestral potters who, in the 1880s, made figurines like this that represented sights one might see at a circus.  Both heads are the same and their mouths are open with tongues hanging out, as if wailing or in pain.  The single body, with two arms and two legs, that supports the two heads is painted in typical Cochiti Pueblo storyteller style with the exception that there are two Avanyu water serpent heads on the torso (see image above), but they are connected to the same body that wraps around the back of the figure—one body, two heads.  They appear to be communicating.

Ortiz started making pottery at age 6, under the tutelage of his mother, Seferina Ortiz.  He has gone beyond making this style of nineteenth century pottery and has progressed to making his own style.   These early pieces of his pottery have become very collectible. This figure is signed and dated.

Ortiz’s figurines were featured in a two-person exhibit at the Wheelwright Museum in Santa Fe in 1999. The exhibit catalog is entitled: Clay People, which may be available from the museum gift shop, The Case Trading Post.

Condition: this figurine was damaged in shipment to us from a client in Connecticut.  The lower body was separated from the upper body.   We have had it professionally repaired and now it is ready to be sold.  It is priced, with the damage taken into consideration, at about two/thirds of its original value.

Provenance: this Cochiti Pueblo Two Headed Seated Male Pottery Figure by Virgil Ortiz is from the collection of a family from Connecticut