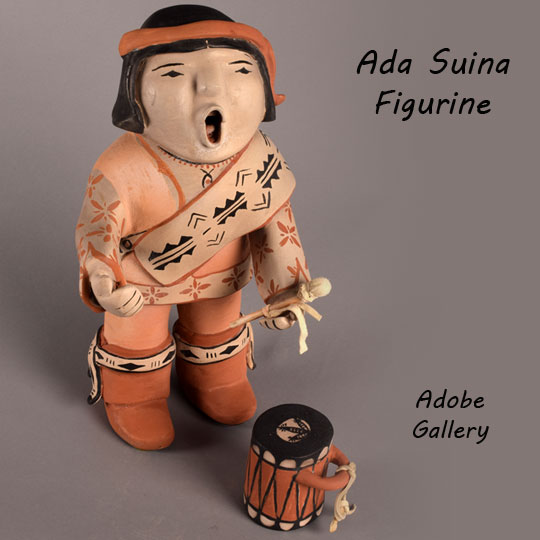 This large pottery figurine was created by Cochiti Pueblo potter Ada Suina. Drummers like the one depicted here play significant roles in many pueblo ceremonials, so it makes sense that they would appear often in pueblo artworks. Their hypnotic, repetitive rhythms carry the songs and the dances, which are key elements of the ceremonies’ larger spiritual expressions. Many ceremonies are at once expressions of gratitude and prayers for abundance, performed not just for the pueblo but for the good of all beings.

With this large figurine, Suina created a fine tribute to those who provide the ceremonial heartbeat. Suina’s drummer is depicted with his mouth open in song. He carries a drumstick and a drum with a corn design on its upper head. He wears the typical ceremonial garb, with the notable addition of a sash over his shoulder, which is decorated with designs that would not be out of place on a Cochiti pottery piece. Suina augmented the traditional orange and black pigments with a second orange tone. It’s softer and lighter, appearing almost pink when viewed in the right light. We’ve seen this tone in other pieces from Suina, and it’s always a welcome addition. Suina’s figurines are always lively and full of character, with expressive movements and appealing faces. This example is exceptional in that regard.

The bottom of one of the drummer’s feet is signed Ada Suina, Cochiti Pueblo.

Ada Suina (1930- ) of Cochiti Pueblo is highly respected for her storyteller pottery figurines and nacimientos. She has always been recognized as one of the premier figurine potters at Cochiti Pueblo. Her storyteller figurines have strong, chiseled faces and happy expressions. She no longer makes pottery of any kind.  Sadly, the white slip used by Cochiti potters is no longer available—the source has dried up.  Rather than use the inferior slip that is available, some of the potters chose to no longer make pottery. Ada is one who chose to cease.

Ada Suina was born May 20, 1930, at Cochiti Pueblo, the daughter of Berina and Eluterio Cordero, sister to Stephanie C. Rhoades (Snowflake Flower). Her maternal grandmother Estefanita Herrera was instrumental in inspiring Ada to become a potter, and her cousin, Virginia Naranjo, taught her the intricacies of pottery making.

Condition: this Large Cochiti Pueblo Singing Drummer Figurine by Ada Suina is in excellent condition, one small chip was repaired by a professional restoration artist

Provenance: purchased online by a Texas collector, without the drum and stick seen here. The collector reached out to Suina, who made a new drum and stick. A copy of a handwritten letter from Suina is included with the piece.