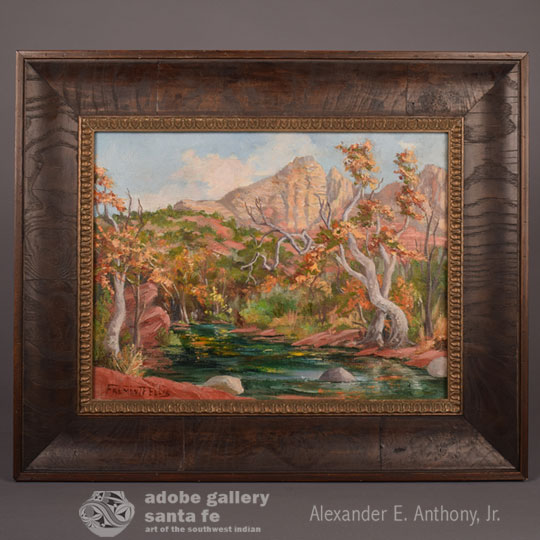 This excellent untitled oil painting by Santa Fe artist Fremont Ellis features an extraordinarily colorful Southwestern landscape.  A river winds around a corner, turning toward the viewer and spreading out over the lower center of the image. Various plants and trees line the river’s edges.  The leaves are small in quantity but strong in color, suggesting that Ellis captured an autumn scene here. In the background, hills dotted with clusters of green trees give way to steep, rocky peaks.  The mountains rise dramatically into a bright blue sky, and a large cloud formation floats around their peaks.

Ellis—a member of the famous, influential Santa Fe artist collective called Los Cinco Pintores—is known for creating excellent landscapes, which are mostly realistic but often used slightly skewed, expanded or exaggerated color palettes.  This piece most certainly fits that description. Viewers who are familiar with the region will recognize that Ellis’ work here reaches, just slightly, beyond the normal tones of the area. The water’s rich green feels almost tropical, and the plant life surrounding the water feels similarly dense and colorful.  It would be inaccurate to say that the piece extends beyond the natural. Rather, it elevates that which already exists into a dramatic and beautiful dreamlike state. This painting stands out from a crowded field of similarly-themed images and reminds us of why Fremont Ellis is such a significant figure in the world of Southwestern art.

The painting is signed Fremont F. Ellis in lower left.  It is framed in a carved and painted wood frame.

Fremont Ellis (1897-1985) was a painter, printmaker, teacher. Shortly after his arrival in Santa Fe in 1919, he joined with Willard Nash, Jozef Bakos, Walter Mruk, and Will Shuster to form one of Santa Fe's earliest and most important artist collectives, Los Cinco Pintores. Although the members of the group built houses adjacent to one another's on the Camino Del Monte Sol and maintained close friendships all their lives, the association was one of convenience and shared interest, not one based on a common painting style. They are mostly known for modernist painting.  Ellis was the most conservative of the group. His intimate knowledge of the Southwest is reflected in his painting. These won many prizes, beginning in 1924 when he received the Huntington Award for landscape at the Los Angeles County Museum. Primarily a self-taught artist, Ellis studied briefly at the Art Students League in New York in 1925. His admirers agree that one of the most important elements of his paintings, whatever their subject, is light—the dry, glowing light of the desert.  This emphasis on light is undoubtedly a result of both the physical character of the Southwest and Ellis' avowed admiration for the American Impressionists.

Provenance: from a resident of Santa Fe living in what is known at Ellis Ranch here in Santa Fe. ARTISTS OF SANTA FE Their Works and Words [SOLD]
by