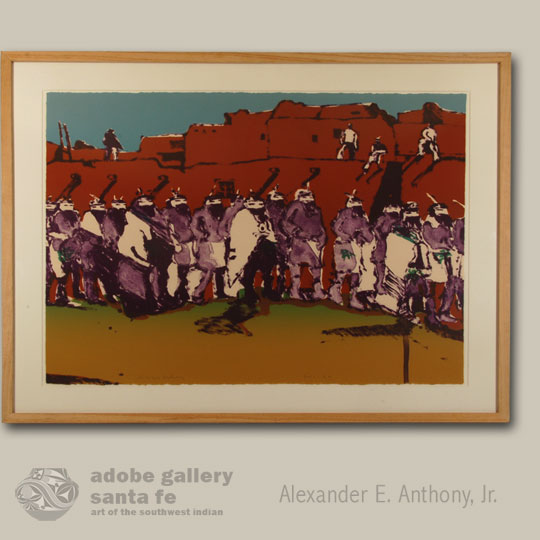 Fritz Scholder (1937-2005)  was born in Breckenridge, Minnesota. He was one-quarter Luiseño, a tribe from Southern California. It was apparent early on that he was a very talented artist. His high school teacher was famous Yankton Dakota artist, Oscar Howe, who recognized and encouraged his talent. In 1955, he attended the Mid-West Art and Music Camp at the University of Kansas where he was voted “Best Boy Artist” and President of Art Camp.

After high school Scholder went on to study with artists Greg Kondos, Lloyd Kiva New, Charles Loloma and Wayne Thiebaud among others. In 1964, after receiving his MFA at University of Arizona, Scholder accepted the position of instructor in Advanced Painting and Contemporary Art History at the newly-formed Institute of American Indian Arts in Santa Fe, New Mexico.

In 1970, Tamarind Institute moved from Los Angeles to Albuquerque. Scholder was invited by Tamarind to do the first major project, a suite of lithographs, Indians Forever. It was the beginning of a large body of work in that medium for the artist. Scholder/Indians was published by Northland Press, the first book on Scholder’s work.

“Dancers at Zuni” depicts in stunning, heavy pigmented, exaggerated colors a katsina dance at Zuni Pueblo. Executed in shades of purple and various shades of rust brown and orange with black shadowing, Scholder has captured the line of Zuni Long Hair Katsinas. The Long Hair Katsina is a singer of sweet songs who brings rain and flowers. His beard and loose tassels of feathers symbolize rain and clouds. Their purpose is to bring rain, and it is said that they seldom dance without the appearance of a soft gentle rain. The artist seems to be looking at the dancers from the same viewpoint as the onlookers resting on the multi-story buildings in the background.

Scholder had been creating lithographs at Tamarind for eight years when "Dancers at Zuni" was completed.  Even his early works as a lithographer were excellent, so it is no surprise that these later pieces are astounding.  Its subject matter would fit in with his 1971 "Indians Forever" suite, but its execution shows an evolved and experienced printmaker.

This lithograph was completed in 1978 in an edition of 150 copies.  This is #30 of 150.  It is mounted so that the entire paper is visible and not covered with mats.  The lithograph was executed at Tamarind Institute, the renowned lithography workshop in Albuquerque that is affiliated with the University of New Mexico. 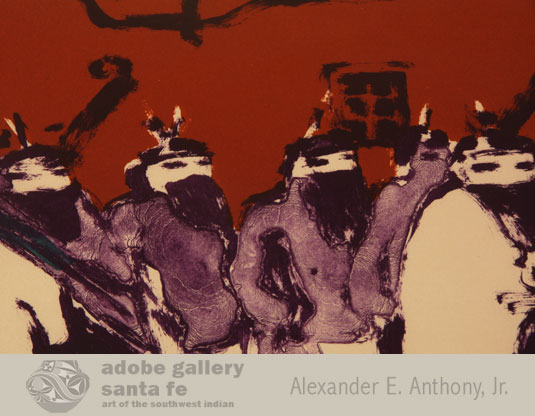 ART AND INDIAN INDIVIDUALISTS: the Art of Seventeen Contemporary Southwestern Artists and Craftsmen [SOLD]
by Guy and Doris Monthan