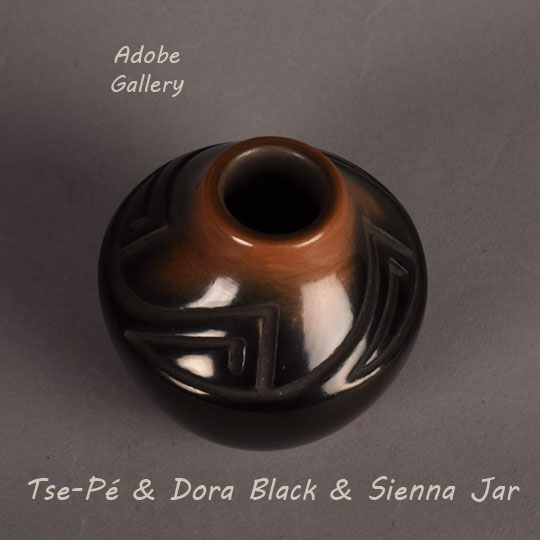 This black and sienna carved jar is perfect.  It was formed into the shape of an olla, highly stone polished, and fired.  Deep carvings in geometric patterns wrap the jar and remind one of the mountainscapes of the Southwest. A secondary heat was applied to the rim, turning the surface finish from black to sienna in that area.  It has been signed on the bottom, TsePe and Dora, San Ildefonso, 1976.

Tse-Pé was the son of Rose Cata Gonzales, who was originally from San Juan Pueblo (now Ohkay Owingeh).  She married Robert Gonzales of San Ildefonso and spent her life there. Tse-Pé married Dora, the daughter of Zia potter Candelaria Gachupin, and she moved to San Ildefonso where she still resides.

Condition: This Tse-Pé and Dora pot is in original condition

Provenance: this Tse-Pé and Dora Highly Burnished San Ildefonso Black and Sienna Jar is from a private collection Indian Pottery of the Southwest Post Spanish Period [SOLD]
by

Who Was Really First? The True Origins of American Art Pottery [SOLD]
by