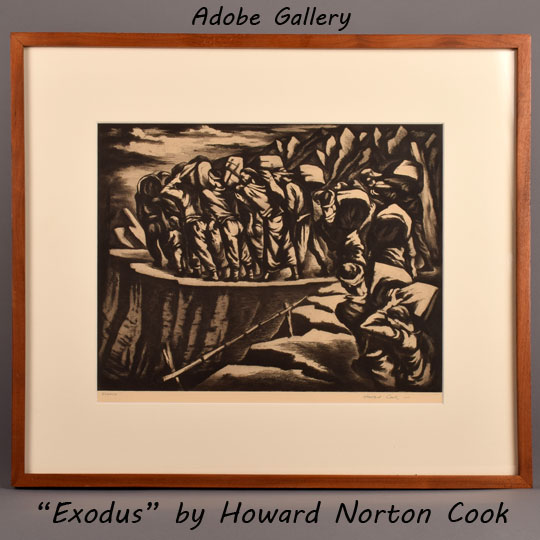 “Exodus” is an etching by Howard Cook, a famous and successful artist who lived and worked in New Mexico for much of his career.  Cook gifted an “Exodus” etching to the Smithsonian American Art Museum, which suggests that the image may have held special significance to the artist.  Looking through Cook’s massive body of work, we see stark landscapes, images of buildings and bridges, and many depictions of laborers and tradesmen.  “Exodus” would fall firmly within that last category were it not for the title and the inclusion of a small child, both of which suggest that these people are travelling.

Cook’s subject here is a long line of people carrying heavy loads along a winding trail.  They are dark but detailed, with faces turned away from the viewer, leaving only their bodies and clothing to express to the viewer the challenge of their journey.  What and where they are leaving is unknown, and who exactly they are is also left to the imagination.  The trail they follow moves along a steep slope.  A portion of its edge is protected by a railing, but the rest is open.  Jagged rocks line the opposite edge of the trail.  A suitably dramatic sky completes the image.  “Exodus” is an evocative image from a significant figure in the history of Southwestern art.

The etching is signed and dated Howard Cook 1947 and titled “Exodus” in pencil.  It is framed under acrylic and a crisp white mat in a wood frame.

Howard Norton Cook (1901–1980) was an American artist.  Cook was born in Massachusetts and then traveled extensively around the world, ultimately making his home in Taos, New Mexico.  During his travels, he studied and explored a wide variety of media, including pastels, watercolors, wood engravings, and various methods of printmaking.  He is best known for his murals, many of which were New Deal art projects. In 1937, Cook was paid $12,000 to create The Importance of San Antonio in Texas History, a 16-panel fresco in a San Antonio post office. Cook exhibited widely and received critical acclaim during his career, and his works are displayed in many major public and private collections.

Provenance: this Etching titled "Exodus" by Howard Norton Cook is  from the collection of a gentleman from Santa Fe Gene Kloss Etchings with Text by Phillips Kloss [SOLD]
by

THE LITHOGRAPHS AND ETCHINGS OF E. MARTIN HENNNGS
by