Four-panel Painting on Canvas of a Ceremonial Pueblo Dance 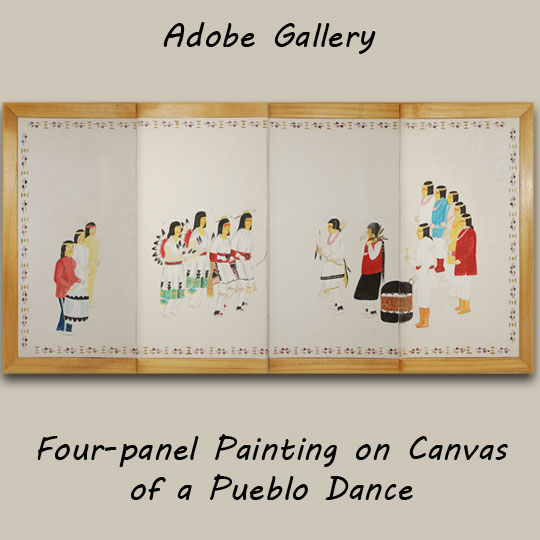 This four-panel folding screen features a pueblo plaza dance scene.  It is painted on canvas.  The artist did not sign the painting and we have not yet been able to make an attribution to an artist. On the far-left panel, we see three figures—a drummer and two chanters. The artist chose to use solid colors for their clothing with little detail provided such as jewelry, blankets, or other accoutrements.

The adjoining panel provides us with four dancers—two female Butterfly dancers on the left and two male accompaniments on their right. In contrast to the lack of detail in the first panel, these figures are presented in the finest detail. The women are fitted out in beautifully detailed clothing with embroidered panels at the base of the skirts, woven belts, jewelry, and white moccasins with leg wraps. The men wear kilts with embroidered panels, wide belts hanging off their sides and each is wearing crocheted leggings of the style shown recently on our website.

The third and fourth panels relate with a drum straddling their edges. There is a male and a female dancer—he with bow and arrow and she with both hands full of feathers. He is dressed in white clothing like those of the previous panel and she is in red and black clothing. A fox tail hangs down his back from his waist and he wears crocheted leggings with fringe. A cape falls down the back of the female.

To the right is a drummer and five chanters. Each of the six is dressed in similar fashion but in varying colors. They all have their mouths open while chanting and the drummer has his drumstick raised, ready to fall on the drumhead.

A continuous border of small triangles and miscellaneous shapes surrounds the four panels at the edges and a blonde wood frame completes the unit.

The painting was not signed by the artist and could possibly have been a student product at the Santa Fe Indian School. The piece can be displayed standing on its own or hung on a wall (* Very Lightweight *).

Provenance: this Four-panel Painting on Canvas of a Ceremonial Pueblo Dance is from the collection of a gentleman from Santa Fe