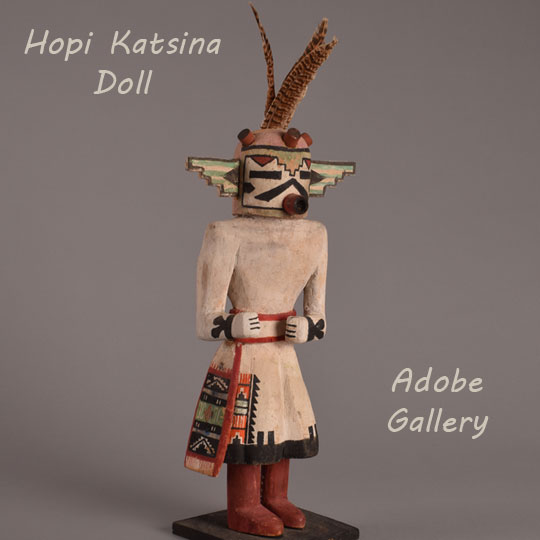 It is interesting to speculate as to the carver who made these dolls, probably on special order from the Fred Harvey Company Advertising Department.  Did he have instructions from the Advertising Department on which katsinas to make, or what size to make them, or on how to make them appealing to a public audience?  Maybe or maybe not.  What we do know is that they have the look of authentic Hopi Katsina dolls representing specific Hopi katsinas, however, there are variations taken by the carver that prevent identification of which katsina is being represented.

Now we have to consider if the carver, with the understanding that his dolls were going to be used to advertise the religious beings of the Hopi, chose to make changes that would not represent an existing or past spirit being of the Hopi, but would look similar enough to pass muster with an uninformed white person.  It is documented that, as early as the 1920s, some carvers were doing this because of their religious beliefs.  That does not make such a doll a fake, as it is a carving by a Hopi in the style of a katsina.

Condition: there is a crack down the left side of the doll and the left arm has been broken and glued.  The feathers appear to be new additions to the doll.

Provenance: this Fred Harvey Advertising Department Collection Unidentified Hopi Katsina Doll is from the collection of a resident of Washington