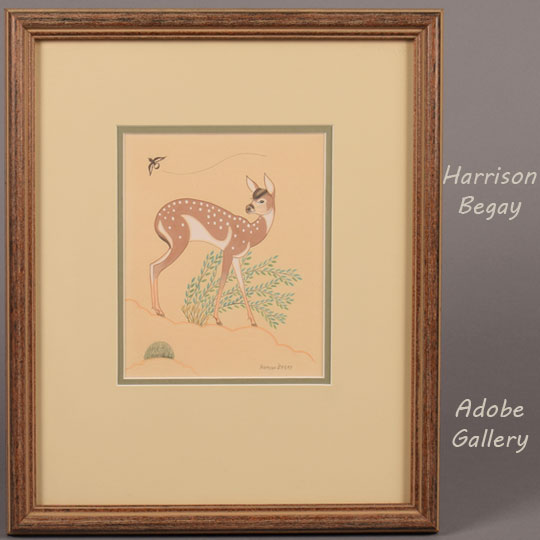 This painting by Diné artist Harrison Begay features a lovely, but very young, brown fawn with white spots.  Begay had a way with creating gentle, appealing depictions of animals, and this piece serves as a fine example of his ability.  His fawn is depicted in profile, but it turns its head around, perhaps investigating some sound it hears off in the distance.

Begay selected beautiful brown, tan and white tones for his fawn, applying his paints in the carefully detailed style that appears in his strongest work.  Note the intricacies of the fawn’s face and the attractive pattern of white spots—this is strong work from a skilled and experienced artist.  A series of orange and white lines bounces across the image, forming the ground on which the fawn stands.  A single bird—again, a bit more intricate than usual—crosses an otherwise empty sky.  Harrison Begay’s work with this smaller-scaled image is excellent.

The painting is signed Harrison Begay in lower right.   It is framed very nicely, under cream-colored matting with a gray interior band, within a carved wood frame.

Harrison Begay (1917-2012) Haskay Yahne Yah “The Wandering Boy” was born in 1917, approximately fourteen miles west of present-day Greasewood, Arizona, on the Navajo Reservation at a place known as Whitecone.  When he was a boy of seven years, his mother died, and soon after that he was sent off to government boarding schools. As he grew older he decided to study art in Santa Fe, where an art school was organized by the government in the early 1930s. From 1934 until about 1940 he attended this school under Dorothy Dunn. Following art school, Harrison attended college and then enlisted in the U.S. Army during World War II. Serving under General Dwight Eisenhower, Harrison did not have much opportunity to pursue his painting. Soon after his discharge and return to Arizona he was able to begin once more his study of art. Then in the 1960s he again met General Eisenhower at the annual Ceremonials in Gallup, New Mexico. At that time Harrison presented General Eisenhower with one of his fine paintings, which is in a permanent collection in Washington, D.C.  According to Jeanne Snodgrass, "Begay's paintings have exerted greater influence on Navajo artists than any others. His work is internationally known."

Did you know? All fawns lose their spots after they are three or four months old. Mother deer often hide their youngest baby deer in vegetation while they forage for food to protect them from natural predators. Source: Outdoors Being website.

Provenance: this Harrison Begay Original Painting of Brown Fawn with White Spots is from a private Arizona collection