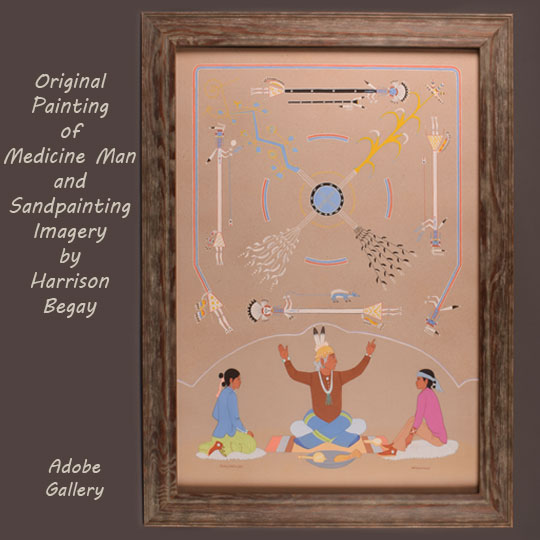 The Medicine Man (or “hatali”) is a vital part of the Diné lifestyle.  Chief among his duties are ceremonies which are performed to restore harmony (or “hohzo”) to a suffering patient’s mind, body or spirit.  There are a variety of healing rituals, which depend on the patient’s symptoms, the causes of the problem and what the hatali deems the proper method to restore balance. These ceremonies can include prayers, chanting, cleansing with cedar smoke, drumming and the creation of sandpaintings. Sandpaintings are used to recreate ancient stories that are associated with spirit beings (or “Yeis”) who have struggled against evil and prevailed. The patient will become part of the story, and call on the spirits to vanquish that which is causing their problems. After a physical and spiritual cleansing, balance will be restored.

This painting by Harrison Begay provides a detailed look at a Diné medicine man’s practice, with an image that is divided into two parts: the physical in its bottom third, and the spiritual in its top two-thirds.  The physical world—a medicine man and two children—is presented with Begay’s typical grace. The spiritual world, presented via the medicine man’s sandpainting imagery, is truly spectacular. In the center of the image is a circular design, from which four important resources emerge: beans, squash, corn and tobacco. Their colors—blue, white, yellow, and black, respectively—correspond with those of the Four Directions and the Navajo creation story’s Four Worlds.  Around this design are depictions of four Diné gods. Stretching around the gods and framing the painting’s spiritual world is a long, colorful Yei figure. A thin pair of white and purple lines separate the artist’s physical world from his sandpainting imagery. In what must have been a deliberate move by Begay, the painting is completed on paper that is the color of sand. In the areas surrounding the spiritual imagery, he added small dots in various colors, giving the “sand” a lifelike texture.

This painting’s framing—wide, wooden frame without matting—works very well with the unique image. The painting, which dates to the 1970s or 1980s, is signed “Haskay Yahne Yah” in lower left and “Harrison Begay” in lower right.

Condition: this Original Painting of Medicine Man and Sandpainting Imagery by Harrison Begay is in excellent condition