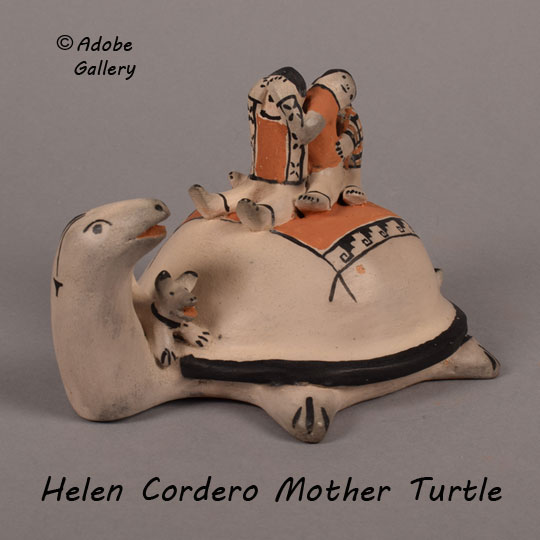 This pottery figurine was created by Cochiti Pueblo artist Helen Cordero. This piece depicts a Cochiti Pueblo legend in which a Mother Turtle comes to rescue the pueblo children in times of turmoil, danger, or flood. Cordero made many of these Mother Turtle figurines during her career but always created variation in the children, their clothing, and other decorative elements. Here, she elevated the appeal of the piece with the welcome addition of a charming canine.

The canine is perched on Mother Turtle's neck, clearly enjoying the ride. The children, on the other hand, are reacting strongly. One covers his eyes, and a second clings to the first's back. The third child covers one eye but appears to be smiling—perhaps we're witnessing the moment in which he becomes aware of Mother Turtle's protection. As usual, the children sit on an orange and black textile, while Mother Turtle turns her head back to check on her passengers. This is an excellent example of one of Helen Cordero's most celebrated styles.

The bottom of the piece is signed Helen Cordero, Cochiti. NMex.

Helen Cordero (1915-1994) was an influential Cochiti Pueblo potter. Cordero lived her entire life at the pueblo, where she married artist and Cochiti governor Fred Cordero. In The Pueblo Storyteller, by Barbara Babcock and Guy and Doris Monthan, Cordero suggested a reason for the popularity of her work: "I don't know why people go for my work the way they do. Maybe it's because to me they aren't just pretty things that I make for money. All my potteries come out of my heart. They're my little people. I talk to them and they're singing. If you're listening, you can hear them." The storyteller has become a significant motif in the world of Native art, and Cordero's pieces are widely considered to be the most sought-after examples.

Provenance: this Mother Turtle Figurine with 3 Children and Dog is from a private collection