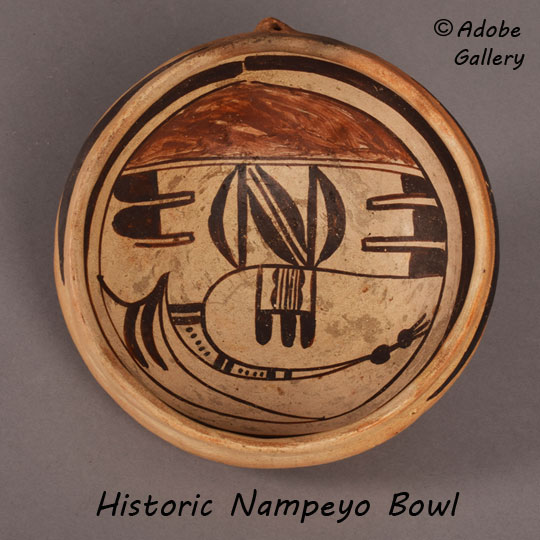 This polychrome pottery bowl was made by Hopi-Tewa potter Nampeyo of Hano. With a defined, incurving rim and a small hanging lug added to the exterior, this piece is formed in Nampeyo's preferred style. She produced many pieces like this, but each example is different, owing largely to inventive design work. This bowl is strong in that regard, with a wonderful circular composition appearing within a thick black band. A pair of design elements appears on the exterior as well, which is atypical.

These designs are complex but a bit more loose than usual, which works well considering the strength of the pigments. The slip is likewise a bit rougher than the typical example, and some abrasions have appeared over the years. In the interior, it holds a consistent cream tone; on the exterior it shifts from cream to warm orange. A fire cloud forms around the lug and reaches up, over the rim, and down about half an inch into the interior. As far as Nampeyo's bowls go, this is not the most refined example, but it excels in character and spirit.

Nampeyo of Hano (1857-1942) was a widely influential potter who lived and worked on the Hopi Reservation in Arizona. Nampeyo is regarded today as one of the finest Hopi potters and one of the most important figures in the history of Native American pottery. Her work is displayed in major museum collections around the world. Nampeyo was taught how to make pottery by her grandmother and began earning an income as a potter while she was still just a teenager. Less interested in innovation than perfection, Nampeyo took an early interest in the design and form of ancient Hopi pottery, which she believed to be superior to the pottery being created by her contemporaries. She visited the ruins of ancient villages and copied designs from pieces of prehistoric and protohistoric pottery onto paper, then reproduced the designs on her own vessels.

Condition: very good condition, some abrasion and wear to slip

Provenance: this Historic Hopi-Tewa Polychrome Bowl by Nampeyo of Hano is from a private collection

Recommended Reading: Nampeyo, Hopi Potter: Her Artistry And Her Legacy by John Collins Nampeyo and Her Pottery [Hardcover] [SOLD]
by Barbara Kramer, Author