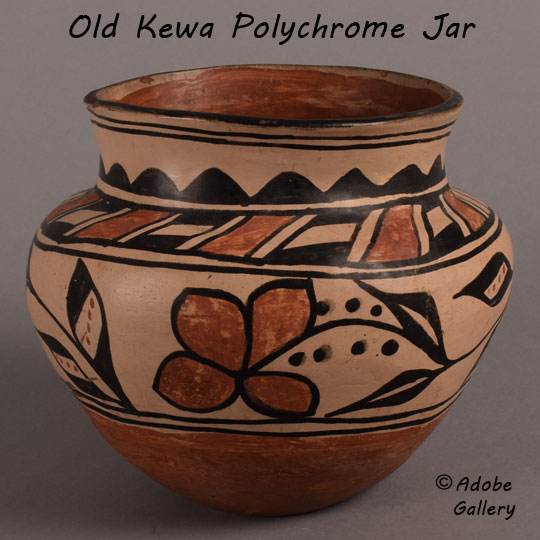 This historic pottery jar was created by an unknown Kewa Pueblo potter. It is an unusual piece, and we mean that descriptor as a compliment. Kewa potters are known to be quite conservative, often making subtle variations of ancestral forms without straying too far from tradition.

This piece offers an atypical design band above the shoulder. This pattern of interlocking diamonds in black and red might have been influenced by pottery from another pueblo—San Ildefonso, perhaps.

An inverted band of rain clouds appears above the band of diamonds, facing up toward the jar's rim. Down below, a wider band covers the jar's exterior in plant life, with flowers flowing gracefully within pairs of framing lines. The pottery vessel itself is not perfectly balanced—its lean toward one side is visible from most angles—but its imperfect form works well with the design, and the piece as a whole is beautiful and rich in character.

Condition: light wear from handling, wear to the slip on one side was treated by a professional restoration artist

Provenance: this Unusual Historic Polychrome Jar from Kewa Pueblo is from a  private collection