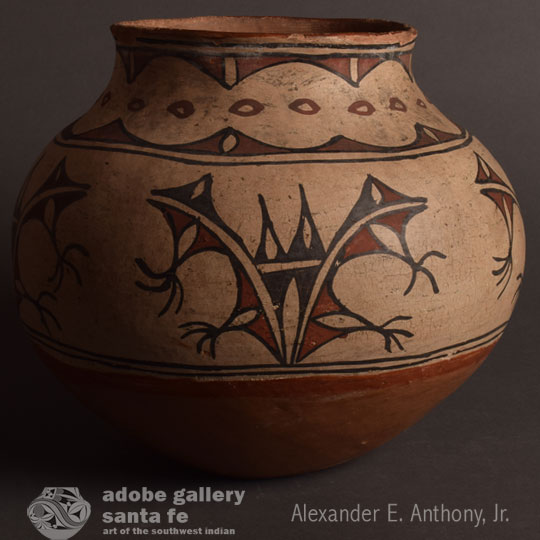 When San Ildefonso Polychrome became a specified pottery type in the 1890s, it did so because red pigment was revived in the design, a change from the previous designated Powhoge Polychrome. This was a revival of a style from the eighteenth century.   On this jar, which we are dating to circa 1890s, the red slip in the design was fired on and is thick and strong.  It is the same pigment used by men as body paint. Stone polished slip used at San Ildefonso shows marks from the stone polishing and it tended to craze during firing, producing cracks or crazing akin to a dry river bed. It appears that this jar has the San Ildefonso stone-polished slip with uniform crazing overall, another indication of its age.

This San Ildefonso Polychrome pottery jar is the shape and style that we have previously identified as the work of Marianita Roybal and we are attributing this jar to her as well.  It is globular in shape with a rolled out rim that was painted with red slip. The circles around the neck are similar to ones on another, but smaller, jar that we have attributed to Marianita.  The overall concept fits previous works thought to have been made by her.

San Ildefonso Pueblo artist Marianita Roybal (1843-c.1910) is the earliest potter identified by name. Jonathan Batkin states that she was an important potter until at least 1910. She was identified and listed in the 1850 U. S. Census Report. It is obvious that only the best potter and best painter of the time could have achieved such a result.

Condition: this Historic San Ildefonso Polychrome Globular Pottery Jar with Red Rim by Marianita Roybal is in very good condition for its age