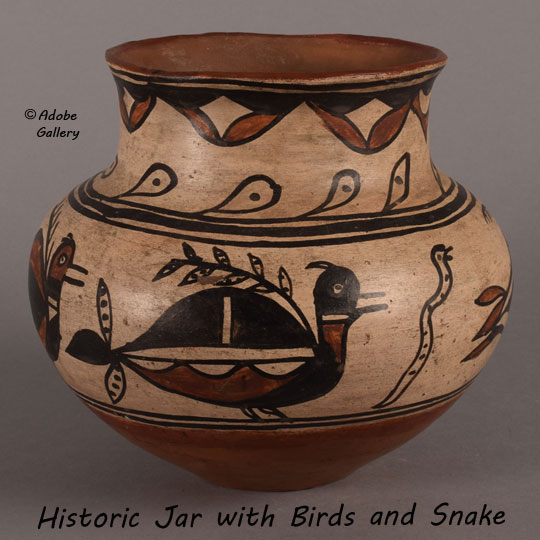 This historic polychrome jar was created by Tonita Peña, or "Ba Tse," of San Ildefonso Pueblo. Those who are familiar with San Ildefonso artwork will likely recognize the name Tonita Peña, as there was a notable painter by that name as well as an early potter named Toña Peña Vigil. The Tonita Peña who created this pot was born around the middle of the nineteenth century and likely passed away a few years into the twentieth. We will refer to her by her Tewa name, Ba Tse or Yellow Deer.

Ba Tse's work is of notably high quality. This piece has a traditional Tewa form, with a tall neck and a flared rim. It's smaller than the typical water jar, a decision that works quite well, as the bold designs seem well-suited to the smaller vessel.

Two design bands appear, with a series of parallel lines separating the two bands. The upper band uses patterns that we've seen on other polychrome works from the era; the lower band displays a unique, wonderful series of figures. Five birds with bodies formed by traditional design motifs circle the jar. Each one is unique, but they fit together perfectly as a group. A single serpent appears, bending its thin form in a way that echoes the shapes made by the birds' curving necks and heads. Similar published examples of Ba Tse's work are dated to circa 1895, so we would estimate that this piece was made then as well. This is a truly exceptional example of historic San Ildefonso pottery.

Tonita Peña Ba Tse (ca. 1847- ca. 1905)-not to be confused with painter Tonita Peña Quah Ah or potter Toña Peña Vigil-was a potter from San Ildefonso Pueblo. In the Autumn 1991 Issue of American Indian Art Magazine, Jonathan Batkin used census records and personal correspondence to explore Peña's family history, ultimately concluding that she was an ancestor of Maria Martinez and other notable San Ildefonso artists. According to Batkin, "Tonita Peña's pots are among the most beautiful made at San Ildefonso at the turn of the century, and like Martina Vigil, Tonita Peña was among the last potters capable of making large storage jars." Peña was not included in the 1910 census, so we presume that she passed away sometime during the first decade of the twentieth century.

Provenance: this Historic San Ildefonso Pueblo Polychrome Jar with Birds and Snake is from a private Colorado collection