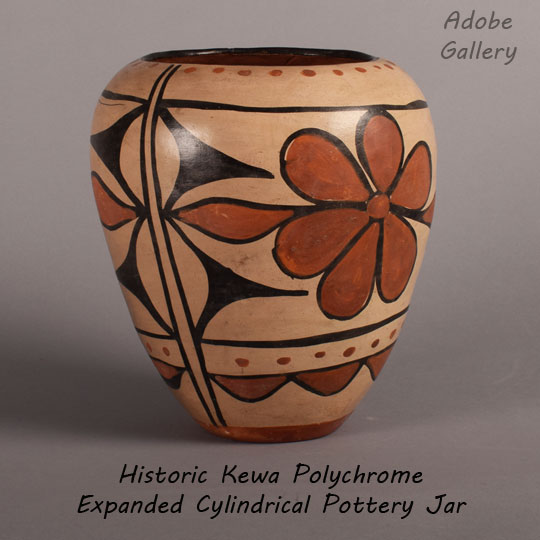 Santo Domingo Pueblo was on the rolaute of the continental trains by the early 1900s.  As a convenience to its travelers, the trains stopped at the pueblo long enough for the Indians to board the train and sell their pottery and jewelry.  As a result, Santo Domingo potters were early to adapt their pottery to the needs of the travelers. They made shapes the travelers were familiar with, and they made small pieces the travelers could conveniently take in their baggage.

This jar, with its incurving rim, is a good example of the style made for sale to the tourists. It is traditional in all aspects of manufacture. It was probably made around 1920. It exhibits the classic traits of late Santo Domingo Polychrome. The interior and the underbody were slipped with red clay. The rim is black. The cream/off-white is rag-wiped bentonite slip and the floral leaf designs were executed in black vegetal paint and the flower petals in red clay.

At one time in the past, this jar was converted for use as an electric lamp. It has now been returned to its original condition by removing the lamp attachment.

Condition: this Historic Kewa Polychrome Expanded Cylindrical Pottery Jar is structurally in very good condition. There are some abrasions to the surface.

Provenance: sold by Adobe Gallery to a client in 2005 from whom we now have it back to sell again.