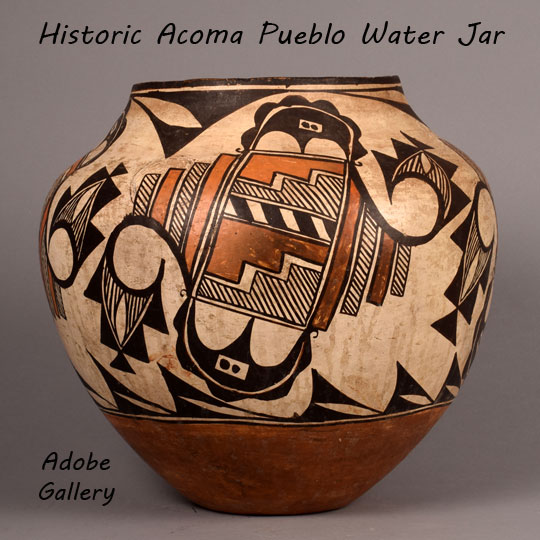 There is nothing quite like a historic Acoma water jar.  Made for use, water jars are large and durable.  It never ceases to amaze how thin-walled Acoma pieces in particular can be.  This water jar is very light for its size and truly an astounding feat in clay.  Based on published Acoma jars with a similar design, we have been able to attribute this vessel to a specific artist from its shape and decorative elements.

Special care was taken in forming the jar.  Its shape is close to perfect and flows very naturally, expanding outward from the base only to very smoothly curve inward at the shoulders toward the rim.  After some initial work, the potter may have smoothed the surface in one single movement from the base to the rim; the curves of its lines are so fluid.  Not only very pleasing to the eye— this jar would have held much water and easily balanced on the head of its user.

With respect to its decoration, the artist began by placing a cream slip on the entirety of the jar’s surface.  A solid base of bold orange covers the bottom section of the vessel.  Two thin lines of dark brown trim the orange, and the top line breaks away into the decorative elements of the jar, as if growing from its base.  Slitted triangles give way to an original motif which is repeated four times across the face of the jar. This design is bold and mesmerizing, with both simple and futuristic elements to entice the eye.  Swirls like tentacles extend from a central rectangle, and all are ornamented with triangles, stripes, and inventive rotations of shape and color. The vessel is rimmed in dark brown and could not be more unique within its category.

Maria (Antonio) Chino was born circa 1835 and died before 1930.  She was listed in the 1910 federal census.  She was not listed in the 1930 census but had been listed as a potter in a 1929 Indian Agency report.  One of the jars referenced above was purchased from Chino by Kenneth Chapman in 1928 for the Indian Arts Fund. [ibid. 414]

On just a single section of the jar, there is black spackling which was not likely applied on purpose.  It is probable that it happened while the potter was holding the jar in her lap when painting the design.  It did not occur from smearing the black pigment because there is no smearing of the black design, so it most likely occurred from the fabric in the painter's lap.  It is not a fire-cloud or something that appeared after firing because it is not removable with Acetone.

Condition: this pottery jar was used and has the marks of its ware. That being said, it is in very good condition.