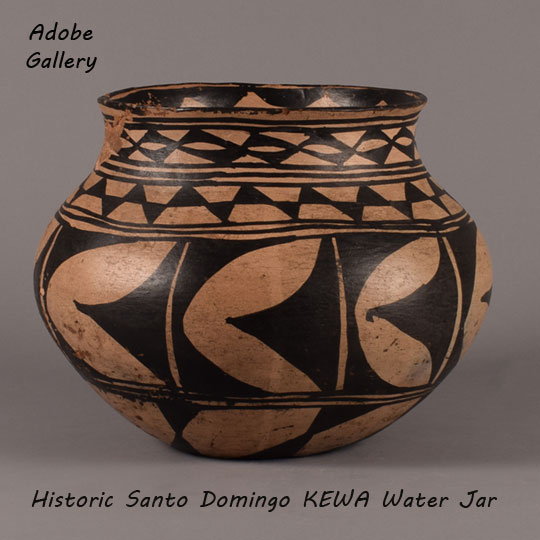 This Santo Domingo water jar dates to the early 1900s. During this time period, potters Felipita Aguilar Garcia and Asunción Aguilar Caté created modern-looking variations of traditional Santo Domingo wares. Their innovative works have become incredibly valuable during the last few decades, and for good reason—they present traditional designs and materials in a unique manner that manages to still look fresh over a century later.

This piece could be an Aguilar sisters' creation, but we can't say with certainty. It could also be a piece by one of the many Santo Domingo potters who was influenced by their style. Note that the jar has four design bands, which is very much an Aguilar jar trait. A strong execution of the tulip design on the widest design band recalls the Aguilars' work as well. The most notable difference is the shape—Aguilar jars are usually tall and slim rather than short and wide. If they made this piece, it was likely in the last few years of the nineteenth century.

Regardless of who made it, this is a beautiful and unusual example of Santo Domingo pottery. The design bands cover the entire exterior, with the cream slip covering even the concave base. It leans a bit to one side but maintains an appealing form. Rain cloud designs circle the rim's interior. One area of the underbody is covered in a loose splash of black, which was likely the result of a spill. The slip and pigments are abraded around the neck, on both the interior and exterior, making evident that the jar was used heavily at the pueblo.

Condition: Wear from use, mostly around the rim, where the slip is heavily abraded

Provenance: This Santo Domingo historic water jar with spilled black pigments is from a private collection