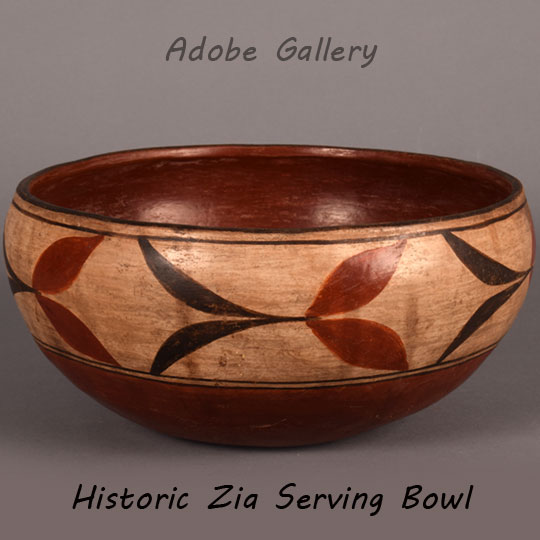 This historic Zia Pueblo serving bowl is a special combination of near perfection and practicality.  True to the common threads of pottery from this pueblo, this bowl is substantial and delightfully decorated.  A deep iron red colors the interior of the bowl and matches the bottom third of the exterior.  Shape and drawn lines were created with such precision that it is hard to eye this piece of pottery as hand made.

A single dark brown line has been placed about a centimeter from the rim of the bowl, unbroken, and mirrored halfway down the exterior with two more unbroken dark brown lines, delineating the band for decoration.  Inside the band a cream slip that is distinctly the hue Zia pueblo’s clay is known to produce lays the background for the floral designs.  The designs themselves are also of the theme Zia’s pottery often holds, with dense foliage painted in dark brown and very rich red.

This bowl is mid-sized, indicating its category as a serving bowl.  It could have also been created for use as a lid for larger storage jars.  What sets this serving bowl apart from other pueblo pottery is everything that makes it distinctly Zia and consequently, what makes it so special.

Condition: The initials BMM are scratched into the bottom of the bowl (see image below), but otherwise this Zia serving bowl is in excellent condition.  The initials are those of the owner and possibly of the maker.