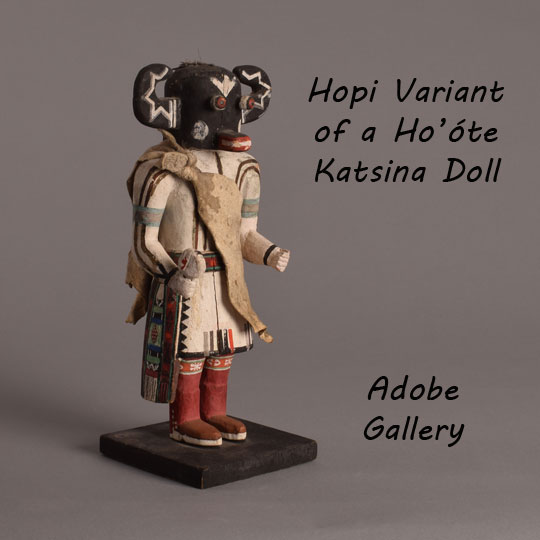 This katsina doll is possibly a Hopi variant of Ho’óte Katsina.  The bug eyes, protruding mouth, and horns with zigzag designs are those of Ho’óte.  The two circles on the cheeks are in lieu of the moon and sun symbols of the Ho’óte.  The symbols on the forehead and between the eyes of Ho’óte have been replaced with a white arrow on this carving.  He is wearing a buckskin covering which Ho’óte sometimes wears.   The body paint does not resemble that of Ho’óte.  The embroidered sash and woven belt over an embroidered kilt are like those of Ho’óte.

Ho’óte is an extremely popular katsina because of his well-liked songs.  He appears as a group in the ordinary katsina dances and sometimes in the Niman ceremony.  The symbols between the eyes and on his forehead are said to be those of flowers, and therefore his dance forecasts the flowers of spring.

Ho’óte is one of the guard or warrior katsinas.  When he appears individually, he functions more as a guard.  In this role he either enforces an action such as the communal cleaning of springs or as a guard to prevent the approach of anyone or anything to the proximity of a location or ceremony.  With the passing of years, many of these functions have been lost as springs are converted to water systems and trails or roads become the province of highway departments.

When Ho’óte appear as a group such as in the Powamu Procession or during Pachavu times they are functioning as warriors.  They surround the more sacred katsinas as a small but ferocious army of fearsome creatures.  [Wright 1977:38]

Condition: a crack in the wood on the front kilt and general abrasions to the paint.  The number 52 is written on the underside of the black pedestal.

Provenance: this Hopi Variant of a Ho'óte Katsina Doll from The Fred Harvey Advertising Department Collection is from the collection of a resident of Washington