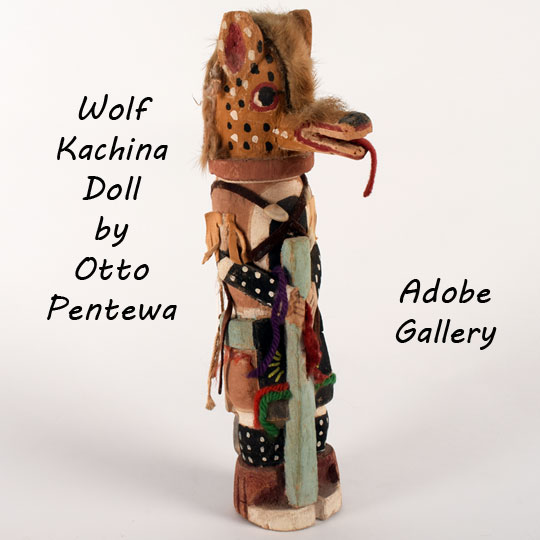 This beautiful Wolf Katsina doll was created by Hopi artist Otto Pentewa.  Along with Wilson Tawaquaptewa, Pentewa was one of the first katsina doll carvers to have work attributed to him by name.  This shift occurred during the 1920s.  Both Pentewa and Tawaquaptewa developed unique, recognizable styles, and their works rank among the most collectible in the world of katsina doll carving.

Pentewa’s Wolf serves as a fine example of his unique, appealing style. The piece begins with the traditional carved cottonwood form, and then expands into more unusual territory with the addition of fur, shells, and various strings, yarns, and fabrics.  These additions are typical of Pentewa’s work, but the application varies quite a bit from piece to piece, with some examples even making use of skulls and teeth.  Pentewa’s work can be quite intense.  This piece, however, is warm and accessible, with a vibrant and energetic color scheme and an appealing presence overall. The Wolf Katsina appears with other animal katsinas, serving in the function of a guard. He dances in line with the other katsinam, but then at times will leave the line and move to the fringes of the dance arena, ensuring that nothing is bothering the other katsinas. All animal dances are prayers for rain and an abundance of game animals.

The wolf’s loincloth is marked with Pentewa’s pumpkin flower signature.

Otto Pentewa (1886-1961) Sikovaya - Pumpkin Flower was a Hopi katsina doll carver.  Pentewa was born at the village of Oraibi on the Hopi Reservation at the end of the 19th century. He was of the Katsina Clan and his Hopi name was Sikovaya, which translates to Pumpkin Flower. One of the distinguishing designs on his Katsina carvings is the pumpkin flower he generally painted on the loin cloth of the doll. It was his hallmark signature. Shortly after the turn of the century, he married and moved to the village of Kykotsmovi where he and his wife raised eleven children. His son, Richard Pentewa, continued in the tradition of carving Katsina dolls.

Provenance: this Hopi Pueblo Kweo Katsina, Wolf Kachina Doll by Otto Pentewa is from the collection of a gentleman from Georgia