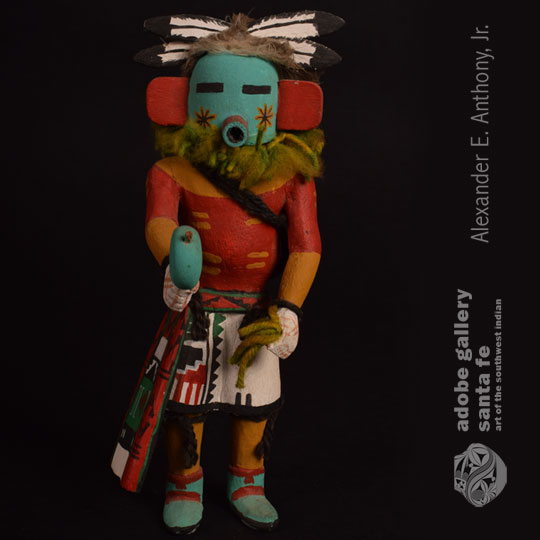 This 1960s Hopi Pueblo katsina is called Peeping Out Man because of the illusion that his eyes are peeping out over the top of the lower part of the mask.  He is a fairly common katsina dancer who appears in the Mixed Katsina Dances, in regular Plaza Dances and, at times, in the Night Dances in March.

When the weather warms,katsina danes are held in the plaza of the village.  These dances may be either Mixed Dances where all of the dancers are different types of katsinas, or they may be a dance where all of the katsinas are the same.  Such dances may be sponsored by people who wish to commemorate some special event such as the return of a son from military service, recovery from an illness, or a child’s birthday.  While there is always a strong element of religion present in these dances, there is also an equally strong element of entertainment. Feasts are held and neighbors visit one another There are often clowns to entertain the audience between dances in the afternoon

Each of the katsinas presented in one of these dances has a definite purpose, often in addition to its primary purpose of bringing rain and fertility.  Most of these katsinas are not limited to the Plaza Dances but may also be presented during the earlier Night Dances or during the procession of the Bean Dance.