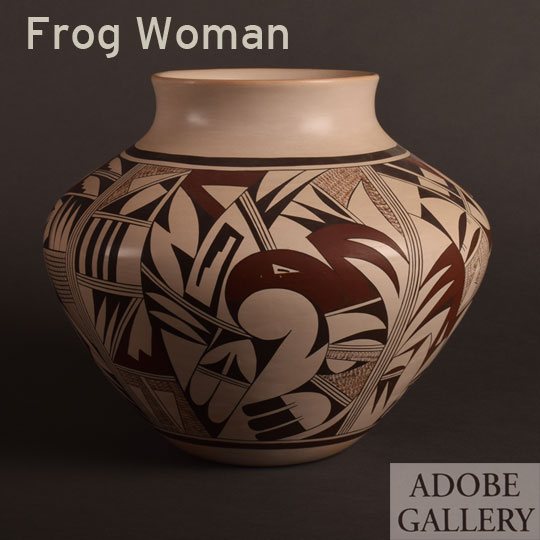 This magnificent large jar was made by Hopi potter Joy Navasie, the second  potter known as Frog Woman. Her mother, Paqua Naha, was first to carry the name.   After Joy passed away in 2012, her oldest daughter then inherited the Frog Woman name.  This jar was made in 1988, or slightly earlier, as that was the year it was purchased.

This jar was beautifully decorated with stylized birds and feathers in true Hopi fashion. The dark brick red and strong black pigments stand out beautifully against the pure white slip.  The design was divided into four panels, each separated by five vertical lines. The two panels opposite each other were painted with the same design. The major design in two of the panels is a parrot with a long curving beak.  The other two panels feature small sections of bird’s beaks and feathers. Frog Woman stone polished the entire inside of the jar, a feat rarely done on jars and mostly seen on bowl interiors. Joy Navasie was born in 1919 on Hopi’s First Mesa and recalls that she began making pottery at the age of 17. She learned to make pottery from her mother, Paqua Naha, the first Frog Woman. Her distinctive decorative style is instantly recognizable, as she used a white slip on which she painted dark brown and rust color designs. Her skillful application of bird, water and sky elements around a perfectly formed pot was and still is unique.  She was a master at the craft.

The vessel stands up in a manner as elegant as any ceramic or porcelain vase and, to those of us who collect pottery, just as beautiful and valuable.  Pottery of the pueblos is truly a national treasure, whether it is from the prehistoric, historic, or contemporary period. Very little tradition in this country has existed unchanged for a thousand years, as has pueblo pottery.  It is something we should be proud of and protect for future generations.

Provenance: from the collection of a gentleman from Atlanta, Georgia who purchased it from Keams Canyon Arts & Crafts on the Hopi Reservation in 1988.