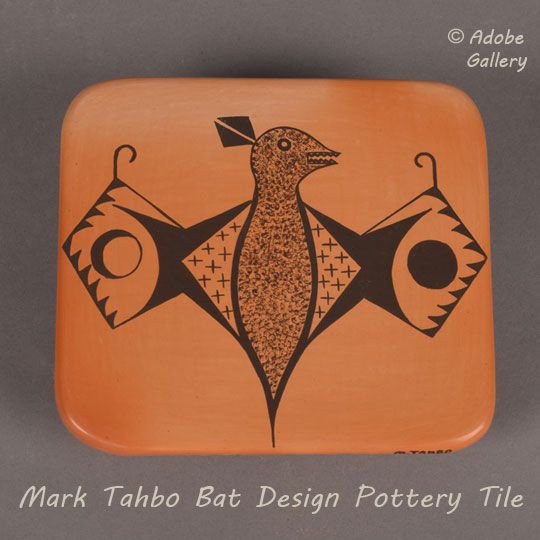 This pottery tile was made by Hopi-Tewa potter Mark Tahbo.  The tile features a bat design in black over golden orange Hopi clay. Each wing is decorated with a moon design, with one representing a new moon and the other a full moon. As always, Tahbo executed the designs with incredible style and skill. The back of the tile is decorated with an intricate pattern of repeating impressed designs, adding an appealing texture to an area that many artists might ignore. This is a unique and appealing work from a significant Hopi-Tewa potter.

Mark Tahbo originally brought this tile to Adobe Gallery in late 2017, along with a handful of tiles with different designs and a few excellent seed jars. Unfortunately, Tahbo passed away just a few months later, so that group of artworks was the last we acquired directly from him. Certain pieces from that group have returned to us, as the collector who purchased them is downsizing. We are delighted to be able to spend time with our friend's late-career work again.

The artist signed M. Tahbo on the edge of the tile (see below). A wood display stand is included.

Provenance: this Pottery Tile with Bat Design by Mark Tahbo was acquired by Adobe Gallery from the artist in 2017, sold to a New Mexico collector who is now downsizing