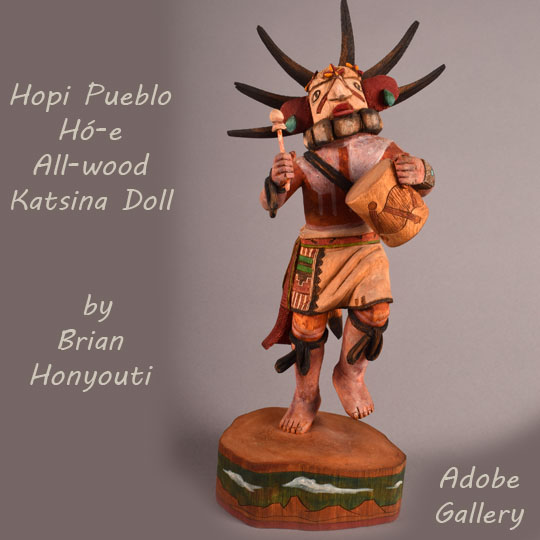 Hopi Pueblo artist Brian Honyouti presents us with his version of a Hó-e Katsina.  It is an all-wood carving of exceptional quality.  Hó-e is considered a clown and there are usually two or three of them in the procession of the Bean Dance as it proceeds around the village.  The hand-carved wooden doll measures 8-⅛ inches from foot to top of head.  The pigments used appear to be oil-based stains.  He is dressed in a traditional Hopi embroidered kilt, cinched around his waist with a woven red belt.  A fox tail is suspended down his backside from the waist belt.  He has a spray of feathers like those of the Nataska Katsina and he carries a drum and drumstick. His face, chest, and arms are painted white and he has a green ruff around his neck. “They are noisy, boisterous teases.  One minute they will have organized a Plains Contest Dance that knocks the other kachinas about while the next moment they will have a foot race underway that will go right through the middle of a group of kachinas.  They will tease the guards or lure the Kwikwilyaka into mocking one of the Angry Kachinas.  Wherever they are, the uproar is continuous, and they are the last to give up and go into the kiva.  Time and again the Guardian Kachinas must return to a plaza to make sure the Hó-e keep up with the procession as they get carried away with their fun.  It is possible to follow their progress by watching the heads of the Hopi youngsters which point to them like a compass to the north pole.” [Wright, 1973:28]

Brian Honyouti had started carving katsina dolls in the 1960s after graduating from high school. He helped his dad paint his dolls and learned to carve his own at that time. According to Helga Teiwes (author), he was the first carver to use wood preservers and wood sealers as an undercoat for the carvings. She said he was also the first to substitute wood preserver for paint and to use oil paints in lieu of acrylic paints. These innovations provided a mellow tone to his carvings rather than the shiny gloss of acrylics. Brian Honyouti passed away on 15 June 2016.  Brian was a model Hopi Indian, helping educate others in a school he founded and funded.  I had spoken with Brian a month earlier.  He was seeking information on some of the exhibits we had at the Albuquerque gallery in the 1970s and 1980s, featuring the Honyouti brothers and their magnificent katsina doll carvings.  A book was being written on his life and he was searching for information requested by the author.  I sent him all the files we had on the Honyouti brothers regarding all the exhibits we had for them.  I enjoyed looking at the old information as I prepared it to send to him.  He called and was so enthusiastic when he received the files and said he enjoyed reliving those experiences through gallery invitations and photos of the guys and their carvings.  It is hard to accept that now he is gone.  He did not live to see the published book, and I am sorry that he missed it.  I think he would have truly enjoyed revisiting those days of his life through the book.

Provenance: from the collection of a resident of Seattle, Washington